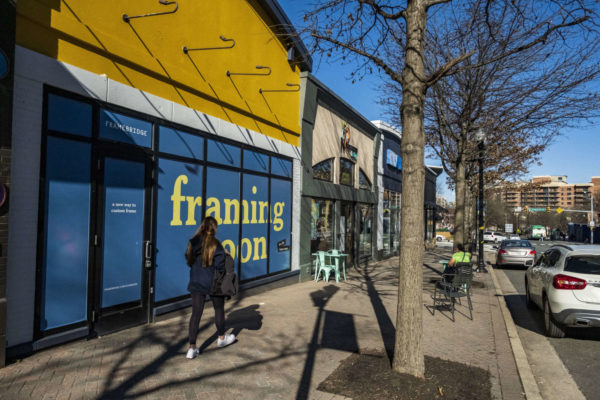 Framebridge is coming to Clarendon.

The D.C.-based custom framing company, owned by Rosslyn-based Graham Holdings, is opening a brick and mortar location at 2839 Clarendon Blvd.

It will be a part of the newly-renamed The Crossing Clarendon (formerly Market Common Clarendon) and takes the place of Lou Lou Boutiques, which closed the past summer.

The store is planning to open “this spring,” a Framebridge spokesperson tells ARLnow, but did not provide more details.

The company is already looking to hire for the location.

This is currently the company’s third physical store in the region, along with stores in D.C. and Bethesda. Another location will soon open near Union Market in D.C., according to the Washington Business Journal.

Framebridge started as a venture capital-funded ecommerce and online-only company, but has since expanded to brick and mortar storefronts. Besides the locations in the D.C. area, it also opened stores last year in New York and Atlanta.

Clarendon has seen a number of comings and goings in recent months.

Heritage Brewing Company closed in November, but it will be replaced by another restaurant later this year. The G.O.A.T. sports bar closed in January as well as the Bracket Room, another sports bar, just this past week.