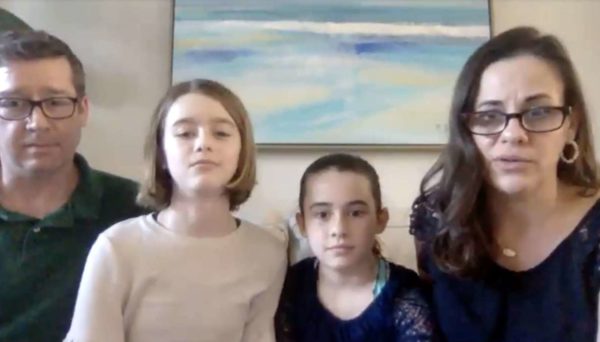 Ellie, 12, has lived with LBSL (leukoencephalopathy with brain stem and spinal cord involvement and lactate elevation) for the last 10 years. It affects fewer than 100 people worldwide and currently has no cure. Her family has been actively fundraising for a cure since 2013.

This year’s all-virtual efforts in honor of Rare Disease Day on Feb. 28 drew a total of $400,000 in donations from around the world. Last Wednesday, the McGinn family awarded the money to the Moser Center at the Kennedy Krieger Institute in Baltimore, which is currently developing and testing new drug therapies that could lead to a cure for LBSL.

“We know they want to find answers as badly as we do,” said Ellie’s mother, Beth, about the team at the Moser Center. “We are just so incredibly grateful to have this brilliant team of researchers working toward a cure for Ellie and others like her.”

Her parents, Beth and Mike, have raised nearly $2 million for LBSL research through their family foundation, A Cure for Ellie.

The McGinn family took its annual 5K through Fairlington online this year, and leaned into other online fundraising opportunities, including a Giving Tuesday campaign and social media outreach. Ellie and her sister Vivian even ran a Facebook live fundraiser in which they poked fun of their parents — throwing eggs at them or forcing them to eat hot peppers — when certain fundraising goals were reached.

“It was great fun and the audience stayed engaged,” Beth said.

But the family yearns for a return to in-person activities and is awaiting news on Ellie’s disease.

“We miss parties, and we miss the annual Fairlington 5K and Silent Auction,” her parents said in a Facebook post. “We miss all of you.”

Sometime this month, the family will receive a formal update on the ongoing research, the post said.

“We haven’t had one since last fall when the team was able to go back into the lab and safely resume work,” the parents wrote. “We are told there is good news and bad news. Not sure what that will mean for Ellie and the other families like us but we know that even in failure the scientists are learning.”

Since her diagnosis, Ellie launched a social media campaign to rename the illness “The Awesome Disease.” She and her family were awarded the National Organization for Rare Disorders’ “Rare Impact Award” and appeared on “The Today Show.”

The A Cure for Ellie Foundation will continue to fundraise and spread awareness for the “Awesome Disease” to help find a cure. Upcoming events, more information on Ellie and LBSL, and how to donate can found on the foundation’s website.

END_OF_DOCUMENT_TOKEN_TO_BE_REPLACED

More Stories
Progressive Voice: Newcomer Hopes Church Will Be ‘Moral Compass’ and Place for Civil DiscourseLeaders Say Arlington Has the Ecosystem to be the Next Austin or Miami