Your old, jaded Beermonger here was all set to pen an ode to the simple yet complex joys of the humble lager and its recent return to respectability within the craft beer culture at large. We’re talkin’ beers driven by high-quality ingredients and centuries-developed techniques, not by hops that form their own sentient amorphous T-2000-esque ooze or the effects of non-nutritive cereal varnish on head retention.

Instead, within the past week, we saw one of the most long-awaited brewery launches (technically a re-launch but it’s been a LONG time) from 3 Floyds out of Munster, Indiana. You might know them for their bright comic book inspired artwork, their frequent collaborations with heavy metal bands, their annual Dark Lord Day festival or, if you’re the type of beer drinker who frequented RateBeer or Beer Advocate in the late aughts, then you know them as The Best Brewery In The World.

That last bit was where I first really was introduced to the brewery. Dark Lord used to sit atop pretty much any list of Best Beers in the World that was floating around at the time. I was convinced, in my mind, that the praise was based highly on the fact that you couldn’t actually get the beer. (The more things change the more they stay the same.) Dark Lord may not have invented the “beer you can only get for one day a year,” but it sure took the beer release to a new level. It was a beer geek party that included bottle shares that were seemingly the stuff of legends.

At the time, the full lineup was very much the same way. They distributed to a very small number of states. (At one time, that distribution reached the East Coast but as demand went up, they pulled back to a very small handful of states.) For years I would visit my in-laws in Chicago and carry an extra suitcase on the way out in order to bring back plenty of Zombie Dust. The beers they produced were very in vogue for the time of Extreme Beer, high ABV, high IBUs, aggressive names and labels — worlds apart from the soft, pillowy hazy IPAs, triple fruit smoothie sours and every type of candy bar in the grocery store checkout aisle pastry stout that rule today.

I was so impressed by Alpha King the first time I had it because, in my mind, it sat perfectly in the space between two of my other favorite beers at the time, Sierra Nevada Pale Ale and Dogfish Head 60 Minute. To see that beer being one of the hottest items on the shelf in 2021 tops my list of unexpected events of the year so far. Let that sink in for a moment. Here, in this calendar year, it’s people losing their minds for bitter IPAs you can see through that has caught me the most off-guard.

Here at Arrowine we got in our first shipment of 3 Floyds last week, and it sold out before I could even send a newsletter out. Luckily we got another shipment this afternoon, so it looks like the Midwest Masters of Hops are going to be here to stay. 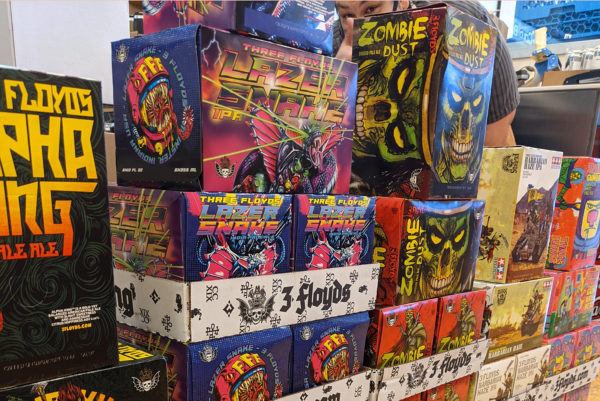