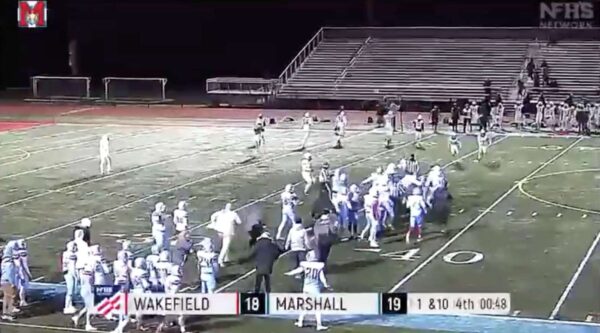 Students Lukai Hatcher and Izaiah Lang took to social media last night (Wednesday) to post about the events they say transpired during the away game on Friday, March 5.

“Me and my teammates were called racial slurs, taunted, and even spit on by Marshall players,” they said in a widely-shared joint statement posted on Facebook, Instagram and elsewhere. “We also experienced unfair treatment by each of the refs and were harassed from the sidelines by coaches and Marshall parents.”

“The Wakefield administration as well as other APS officials have been in contact with Marshall High School, VHSL officials and the referee association about this incident,” Bellavia said. “APS administrators have been meeting regularly with the Wakefield team and parents to provide support since the incident occurred.”

Game footage shows a fight breaking out between the teams. APS confirmed that three Wakefield students were given three-game suspensions as a result of the fights, but the sanctions have since been knocked down to one-game suspensions per Virginia High School League guidelines.

Wakefield ended up losing the game to Marshall, 19-18.

I go to Wakefield high . We went to Marshall I school . Yes we were mad because we were losing but we wanted the game to end and go home. A white player from Marshall spits on a black male from my team results in a fight that could have been prevented. Share this video. pic.twitter.com/Pt3lHibygP

Hatcher and Lang alleged in their statement that what happened on March 5 has happened before.

“Marshall High School’s athletic teams have been known to demonstrate a culture of racism and unsportsmanlike behavior,” including foul play on the basketball court, they said. “We are shining the light on the continuing culture of tolerance for unjust and discriminatory practices in sports for minority athletes and seeking accountability in support of change.”

“We as a team complained to the refs all game about the way that we were being treated yet the flags were consistently thrown on us and even our coaches,” Hatcher and Lang added. “We should not be punished for defending ourselves and each other especially because during the entire game the refs, [whose] job it is to ensure each game is fair and who were supposed to protect and defend us, did not.”

Principal Chris Willmore said in a letter to families Thursday afternoon that “the adults who were responsible failed” the Wakefield players.

“The administrative team and I are outraged by the blatant acts of racism our players were subjected to during the game and that the officials did nothing to intervene despite our urging and even after our coaches signaled them to the behavior multiple times during the contest, allowing the situation to escalate,” he wrote. “This is unacceptable.”

“All coaches have been instructed to leave the field/court immediately if our student-athletes are subject to racist, bigoted behaviors. Our student-athletes will not be put into a position like this again,” Willmore continued, adding that there have been “other incidents that we’ve have experienced in the past.”

“Our leadership and School Board are calling on VHSL and all parties involved in extracurricular activities to reform and change their practices to ensure our schools and athletic events are free of racism, bigotry, hate speech and unsportsmanlike conduct,” he said, in part. “APS encourages all students and staff to continue to stand up and call out acts of racism, hate speech and other forms of discrimination when they see them.”

In a statement, Fairfax County Public Schools said it “does not accept acts of intolerance” and has “expectations of behavior in our students and staff.”

“At FCPS, our primary responsibility is the safety and well-being of our students and staff. Every student must understand the value of appreciating each other’s differences, extending common courtesy, and treating each other with respect,” the statement said. “We must all be committed to do better.”

The administration conducted a thorough investigation involving VHSL, officials, staff, players and families from both teams, according to the statement. The school system said it is working with the school, FCPS leadership and coaches from both teams to develop a plan for restorative justice.

In speaking out publicly, Hatcher and Lang said they were pressing for change.

“This isn’t new and enough is enough!” they wrote. 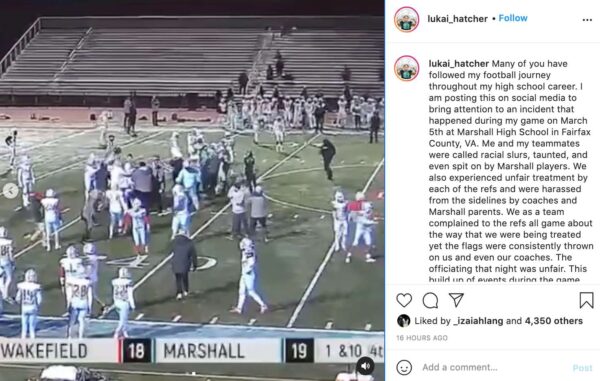 The full statement from Wakefield High School’s principal is below.

Yesterday, several members of our football team and their families shared on social media information about racist actions they were subjected to during a football game on March 5, including being called the N-word, “boy,” and being spat upon. While I will address this further at the PTSA meeting on Saturday morning, I want to update you on what has transpired since the game. Please be mindful, however, while students and families are welcome to share details about things that may happen at school, as principal I cannot share information that could easily identify a student or students.

First, the administrative team and I are outraged by the blatant acts of racism our players were subjected to during the game and that the officials did nothing to intervene despite our urging and even after our coaches signaled them to the behavior multiple times during the contest, allowing the situation to escalate. This is unacceptable.

Over the weekend following the incident, Mr. Hailey, our Director of Student Activities, Coach Hogwood, and I spoke several times about actions we must take to support our players as we watched and re-watched video of the moments prior to the altercation that happened at the end of the game.

During the following week, we had conversations with the students involved in the altercation, their parents, the Director of Student Services (DSA) and acting principal of Marshall High School, leadership of the Virginia High School League (VHSL), staff at the Northern Virginia Football Officials Association, and Fairfax County Public Schools (FCPS) staff. We also notified Superintendent Durán and other APS leaders, including Assistant Superintendent for Teaching and Learning, Ms. Bridget Loft; Chief Diversity, Equity and Inclusion Officer, Mr. Arron Gregory; and Health and PE & Athletics Supervisor, Ms. Debbie DeFranco. Members of the School Board were also briefed on what happened. Our leadership and School Board share our outrage about what transpired.

On Thursday of last week, Mr. Gregory and I met with all the players and coaches participating in our football program from the 9th grade team through varsity. We talked with them about what happened and allowed them to share with us how they were feeling and to ask us questions. One student asked what they should do if this happened again. I responded to the student that, first, I was extremely proud of the restraint they had shown for 2 1/2 hours and that they handled it exactly as they should have: they reported it to the referees and then with their coaches. In this case, the adults who were responsible failed them. I also informed them that in the future, all coaches have been instructed to leave the field/court immediately if our student-athletes are subject to racist, bigoted behaviors. Our student-athletes will not be put into a position like this again.

Additionally, I have written a letter to the leadership of VHSL describing the incident at Marshall and other incidents that we’ve have experienced in the past several years at different sporting events and calling on VHSL to take concrete steps to address racism and bigotry with their staff, referees, principals, and DSAs. That letter has been signed by Superintendent Durán and Arlington School Board Chair, Monique O’Grady.

Several people have questioned why the Wakefield players are being punished. While we were able to have the original 3-games suspension reduced to a 1-game suspension, VHSL guidelines do not permit eliminating the suspensions entirely. I also want to clarify that this is a game-suspension, meaning the students identified in the referee’s report of the incident cannot play in one game. They have not been suspended or in any other way been punished by the school. At this point, we have exhausted all avenues with VHSL to have the Wakefield game-suspensions overturned.

We will continue to advocate for our players and urge change within VHSL and all parties involved in high school extracurricular activities to ensure our schools and athletic events are free of racism, bigotry, hate speech and unsportsmanlike conduct. This includes continuing to take actions at Wakefield to strengthen our school community and evolve our practices to ensure all students feel safe, supported, and included at school and on the field. Our students deserve nothing less.

Read more →
More Stories
Statutes of Liberty Readerpalooza: We Want Your Questions!Health Matters: I Had COVID-19, Should I Still Get the Vaccine?