This column is sponsored by BizLaunch, a division of Arlington Economic Development.

Originally a personal chef for celebrities in Atlanta, Jennifer Jones, Creative Founder of Cosmopolitan Plated, launched her company in Arlington in 2016.

“I went from a personal chef who needed something more out of life to start a business where I could fully incorporate who I am,” Jones said.

In searching for markets to locate Cosmopolitan Plated, the Washington region attracted Jones. She knew the area had a large target demographic of consumers with high disposable incomes, wanting to connect with others through creative group cooking experiences.

Cosmopolitan Plated’s initial offering was a $40 class called “Dinner on the Dime,” a weekday class on Capitol Hill that taught attendees how to make fun, fast and affordable meals.

“I wanted to create a class where people felt comfortable to come as they are, and the outside world didn’t matter,” Jones said.

As Cosmopolitan Plated added additional classes, including Brunch & Bubbly, more people became aware of the experiences, and the company’s following grew. During this time, companies became interested in Cosmopolitan Plated for customized team-building workshops, using cooking to create a stronger bond among teams.

“There are no titles or hierarchy in my cooking classes, and once you drop that, it provides an opportunity to see people for themselves,” Jones said.

From 2017 through 2019, Cosmopolitan Plated saw consistent growth from community referrals and media placements within the B2B and B2C segments. In 2019 Jones came to BizLaunch for expansion ideas and connections, enabling her to fully realize her company’s potential.

“In January 2020, I thought 2020 was going to be the best year ever, as I exceeded my revenue target week after week,” Jones said.

In February 2020, Jones began to notice a decline within her B2C clientele as the COVID-19 pandemic began taking hold in other countries. Meanwhile, a client mentioned that their company was suspending all travel and meetings indefinitely.

“I realized after speaking with my client that if people can’t get physically together, I’m out of business,” Jones said.

However, she continued to push forward and reimagined her business model to prepare for a COVID-19 world.

“I went on Amazon and began ordering earpieces, mics, lights and other digital streaming tools, and by the first week in March, I was up online and prepared to offer classes digitally,” Jones said. 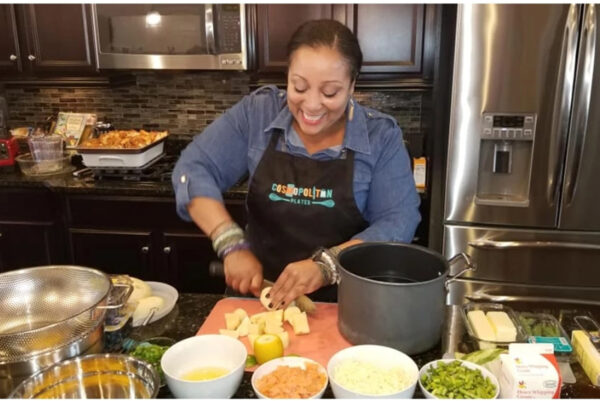 By this time, the shutdowns began coming state by state, and Jones quickly tested her digital platform and used ARLnow’s free event listings to market her new service offerings.

“I wanted to give community information to help people prepare, and so my digital classes became a Q&A initially,” Jones said.

“During the last year, the resource that has helped the most was the community, from referrals and testimonials from customers and community members sharing necessary information. It’s helped to sustain and grow my business from the very beginning and helped it thrive during a challenging year,” Jones said.

For more information about Cosmopolitan Plated, including how to book a custom team-building workshop or to take one of her virtual cooking classes, visit www.cosmopolitanplated.com.