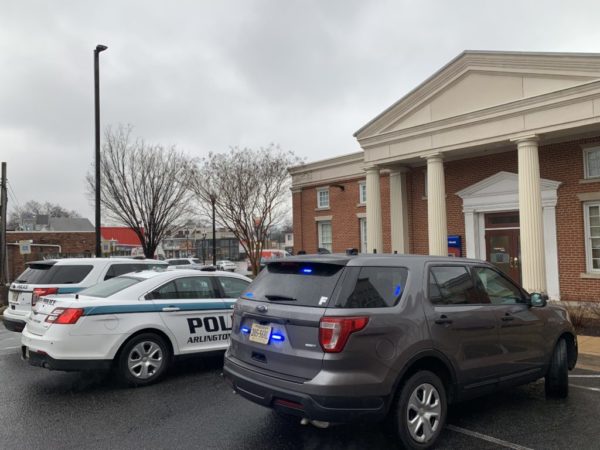 A man who terrorized businesses in Arlington, Alexandria and elsewhere from 2018 to 2019 is going to prison.

Freddy Lee McRae, 35, pled guilty to a series of bank and retail robberies last year. On Tuesday McRae, dubbed the “Beltway Bank Bandit,” was sentenced to 21 years in federal prison.

“This case involved a chilling armed robbery spree during which innocent community members were threatened with serious injury or death if they did not comply with repeated demands for money,” Raj Parekh, Acting U.S. Attorney for the Eastern District of Virginia, said in a statement. “We are thankful to our law enforcement partners for their thorough investigation across multiple jurisdictions to bring the defendant to justice.”

As detailed in a press release, McRae’s crime spree included the attempted robbery of a Capital One branch on Columbia Pike, the armed robbery of Legend Kicks & Apparel on the Pike, and a subsequent police chase on the GW Parkway that ended with McRae crashing his car into the river and trying to swim to freedom.

On December 10, 2018, McRae robbed a Burke & Herbert bank branch located in Alexandria. McRae approached a teller, who asked if he wanted to make a deposit. McRae responded, “gimmie your money,” before lifting up his shirt and pulling a pistol from his waistband, which he pointed at the teller. As the teller gathered money, McRae racked the slide on the pistol and demanded all large bills. McRae fled with approximately $1,366 in cash.

On April 21, 2019, McRae robbed the Legend Kicks & Apparel store located in Arlington. McRae brandished a pistol and demanded that two store employees empty their pockets, which they did. McRae then ordered the employees to lie on the floor before taking approximately $2,160 in cash that belonged to the store. McRae fled the store on foot and the area by vehicle. When a law enforcement officer tried to pull over the vehicle, McRae stopped only briefly before leading law enforcement officers on a vehicle pursuit on the George Washington Memorial Parkway. McRae ultimately jumped out of his moving vehicle prior to it crashing and sinking into the Potomac River. McRae tried to flee law enforcement by jumping into the river, but officers pulled him out and placed him under arrest.

A 3 BD/4.5 BA condo with two wraparound terraces and city views sold for $3.2 million, making it one of the most expensive homes sold in July.

The new ARLnow Press Club has a number of features we always wanted to bring readers — and now can with your support. One that we haven’t advertised as widely…

Protected bike lanes on Fairfax Drive are a project whose time has come. It’s a critical link that would connect commercial areas, parks, and trails to thousands of Arlington residents. It deserves a place in Arlington’s next 10-year Capital Improvement Plan.