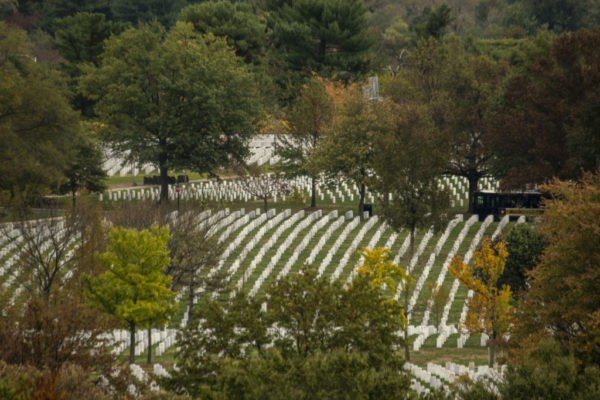 A week after the First Lady visited a nonprofit in Clarendon that supports military families, Biden is visiting Section 60 of the nation’s most hallowed ground, where servicemembers who made the ultimate sacrifice in Iraq and Afghanistan are buried.

The visit immediately followed a speech at the White House in which Biden said all remaining U.S. forces will be withdrawing from Afghanistan, starting Saturday, May 1. The withdraw is expected to be complete by Sept. 11.

Some roads near the cemetery, including the Memorial Bridge, were temporarily closed due to the presidential motorcade. The president arrived at the cemetery around 3 p.m. and departed about 20 minutes later.

During the brief visit, Biden walked past a row of headstones carrying an unopened umbrella, the grass wet amid a light rain. He saluted a wreath and said of the many headstones, “it’s hard to believe, isn’t it?”

He expressed amazement at the sacrifice of those “prepared to give their lives for their country,” generation after generation, and said in response to a reporter’s question that it was not a hard decision to end America’s longest war.

“For me it was absolutely clear,” the president said.