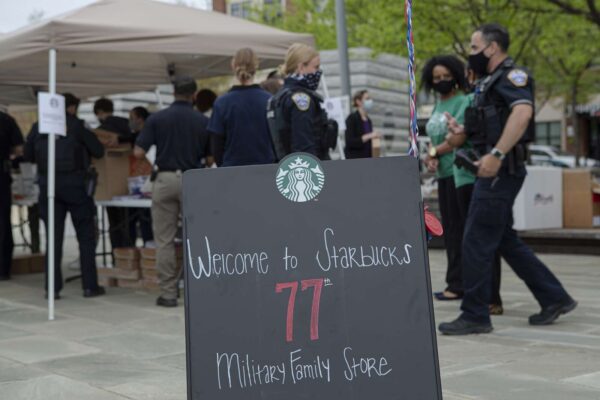 The coffee chain’s Military Family Stores are located across the country and are placed near military bases; in this case the store is only about a mile from Joint Base Myer-Henderson and the Pentagon. The Starbucks at 2413 Columbia Pike is currently the only such store in Arlington, though there’s another one in Fairfax County near Fort Belvoir.

A Starbucks representative tells ARLnow that three of the employees at the Penrose Square store are veterans or military spouses.

As part of the dedication, Starbucks, in partnership with Operation Gratitude, hosted a service project outside the cafe to assemble 500 care packages for military families in Arlington and at other local bases. The care package included handwritten letters of support, handmade paracord bracelets, snacks, candy, and personal care items.

“Military service members and their families across Arlington County can look at this store right here in their own community and know that they are better understood and appreciated,” said Paul Cucinotta, Chief Operating Officer of Operation Gratitude, in the press release.

Arlington police officers and firefighters were among those volunteering to assemble the care packages.

“The Arlington County Police Department has previously been the recipient of Operation Gratitude and are honored to now have the opportunity to pay it forward through service that supports veterans and military families,” ACPD spokesperson Ashley Savage told ARLnow. “By filling these care packages, we hope to show our appreciation for the men and women who bravely served our country and the sacrifices of military families.”

ACPD has previously been the recipient of @OpGratitude and were honored to have the opportunity to pay it forward through service that supports veterans and military families. https://t.co/dQDtiyfLcC