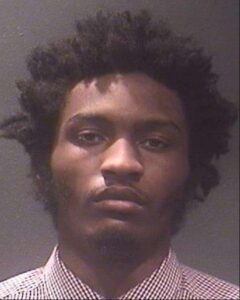 A 22-year-old man was arrested last night and charged with attacking and strangling a woman as she walked through a neighborhood near Courthouse.

The attack happened along a path on the 1800 block of N. Uhle Street, in the Colonial Village community, at around 7 p.m.

Police say the man put a cord around the woman’s neck, pulled her to the ground and then tried to strangle her with his hands. He ran off “when two witnesses arrived in the area,” according to police.

Detective work led police to a suspect who was subsequently arrested on the 1500 block of N. Pierce Street, in the Rosslyn area.

“Following the April 13 incident, detectives launched a thorough investigation which included canvassing for information, reviewing crime scene evidence, interviewing witnesses and following up on investigative leads,” Arlington County police said in a press release. “As a result, detectives identified [Marquis] Holmes as a suspect and sought a warrant for Strangulation.”

“On the evening of April 21, officers responding to the report of a suspicious person in the 1500 block of N. Pierce Street located the suspect and took him into custody without incident on the outstanding warrant,” the press release continued. “Following an interview with detectives, an additional charge of Abduction with Intent to Defile was obtained.”

The abduction charge implies that police believe the suspect intended to have some sort of forcible sexual contact with the victim.

The police department is asking anyone with additional information about the case to contact them.

“This remains an active criminal investigation and anyone with additional information is asked to contact the Arlington County Police Department’s Homicide/Robbery Unit at 703-228-4180 or [email protected],” police said.