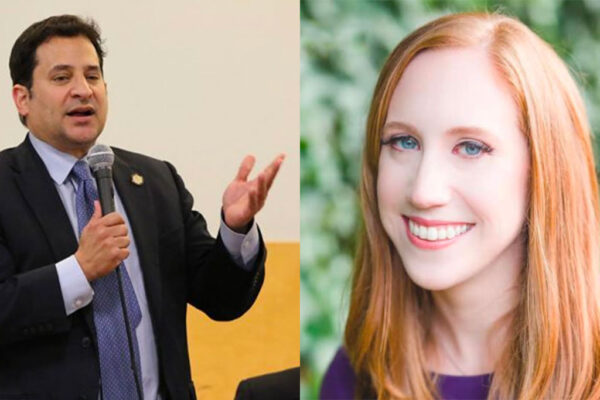 The race for the 45th District House of Delegates seat is a weird one.

He’s not alone in this — running for two seats is legal in Virginia — but it leaves the 45th district in an awkward Schrödinger’s cat-type race where Bennett-Parker is simultaneously running and not running against Levine.

“It’s a weird situation,” Levine admitted. “I never expected this to happen. [But] it’s legal under Virginia law. I think I’ve been a good delegate and the people should re-elect me. If I win both, I’ll resign from the 45th district and there will be a special election.”

(The 45th District itself is a bit odd, encompassing some of the residential neighborhoods around Pentagon City to the north; Shirlington and Fairlington to the west; Del Ray, Potomac Yard and Old Town Alexandria in the center; and a narrow corner of Fairfax County to the south.)

Levine, a former radio talk show host, was elected in 2015 and campaigned for stricter gun control regulations and expanding healthcare access, among other progressive goals. Levine, like many Democrats in the state legislature, has found it easier to make good on those campaign promises after Democrats took the majority in 2019.

“This year, the predominant gun regulations have been my bills and in all state-owned buildings and offices and polling places,” Levine said. “Introduced 47 bills and passed half of them… and it wasn’t my bill on marijuana legalization that passed, but I led the way.”

Bennett-Parker, co-director of the nonprofit Together We Bake, was elected to the Alexandria City Council in 2019 and said her experience working in local government would bring a unique perspective to the state legislature.

“First, having served as Vice Mayor, I understand the nuance of the role that local government plays in people’s lives and how the state is often an impediment to localities in serving their residents,” Bennett-Parker said. “Currently there are only 18 Delegates out of 100 who have served in city or county government and none of them are from Northern Virginia. Obviously, we face different issues than other parts of the Commonwealth. I hear from constituents all the time who want the City Council to do things that we can’t do because we don’t have the authority.”

Bennett-Parker also noted that she would be the minority in a government body that is still 70% male.

“Women have for too long been held back by governmental policies and programs designed by men,” Bennett-Parker said.

Bennett-Parker’s nonprofit, Together We Bake, is an Alexandria-based workforce training program that helps women exiting the criminal justice system, experiencing homelessness, recovering from abuse or addiction, or facing unemployment.

Bennett-Parker has been reluctant to criticize Levine openly, saying instead that she aims to focus on campaign goals.

“When I decided to run, this race looked like it would be an open seat, as Delegate Levine had announced he was running for Lieutenant Governor,” Bennett-Parker said. “I am focused solely on this district and serving its residents. I have delivered results for the 45th district as Vice Mayor and on regional bodies, and I will keep doing so in Richmond.”

(Levine’s campaign says he announced he was running for re-election at the same time as his lieutenant governor announcement.)

Levine, in contrast, has no qualms about saying that he doesn’t think Bennett-Parker is the right candidate to replace him as the 45th District delegate.

“No, I don’t think so,” Levine said when asked if he thought Bennett-Parker would make a good replacement.

Levine said that part of his role as delegate has been taking an active role in community meetings and discussions, something he says he hasn’t seen from Bennett-Parker.

“I absolutely have not neglected my community,” Levine said. “We had a shooting in Old Town on Monday night. I was at a community meeting with Police Chief Michael Brown. [Bennett-Parker] wasn’t there. It was a room full of concerned constituents and she wasn’t there… I was out at a COVID memorial. I was there. [Mayor Justin] Wilson was there. [City Council member Mo] Seifeldein and [City Council member Canek] Aguirre were there. You know who wasn’t there? Elizabeth Bennet-Parker. I’m more active in the community every day and I don’t see her.”

Some of Levine’s peers have disagreed with his assessment, however, with Bennett-Parker winning endorsements from state Senator Adam Ebbin and former delegates Marian Van Landingham and Rob Krupicka, among others. She was most recently endorsed by Arlington County Board Chair Matt de Ferranti, according to an announcement this morning.

According to the Virginia Public Access Project, Bennett-Parker has raised $106,434 to Levine’s $45,573 — though Levine has raised $705,284 in the lieutenant governor race. Bennett-Parker’s top donors include attorney and Democratic financier Sonjia Smith, Levine’s 2015 opponent Julie Jakopic, and Alexandria School Board member Veronica Nolan.

In the delegate race, Levine’s top donors include the Virginia Trial Lawyers Association and the Northern Virginia Labor Federation.

For both Levine and Bennett-Parker, expanding healthcare and combatting the effects of climate change are two of the major priorities ahead for the state legislature.

“In terms of fights ahead: healthcare is the big one,” Levine said. “We need affordable healthcare. I think healthcare needs to be more transparent and we need to make sure people aren’t being bankrupted by healthcare costs.”

Bennett-Parker said the state should take the momentum from expanding Medicaid and keep moving forward.

“Expanding access to affordable health care,” Bennett-Parker said, when asked about her top priorities. “Expanding Medicaid was an important step in the right direction, but we need to do more to make healthcare, including mental healthcare, more accessible and affordable for all Virginians. We also need to find a way to lower prescription drug prices, especially for seniors.”

Bennett-Parker and Levine both argued the state needs to step up and do more to combat climate change.

“Fighting climate change and its impacts [is a priority],” Bennett-Parker said. “We need to treat climate change like the emergency it is and work to ensure a just transition towards 100% renewable energy. We also need to mitigate the impacts of climate change — especially when it comes to ensuring our most vulnerable communities are protected.”

“This pandemic has been especially devastating to women of color, who have lost jobs at rates significantly higher than any other group,” said Bennett-Parker. “We need to work to ensure our economic recovery is equitable, but beyond that, we need to do better than the old normal.”

“That means expanding access to affordable, quality early childhood education starting at birth,” the continued. “It means passing real worker protections into law, including paid family and medical leave. It means working to ensure all students receive a quality public education, including access to apprenticeship and vocational opportunities. And it means reforming our tax code to help families and small businesses.”

Bennett-Parker also said her experience in local government can help her advocate for loosening the state’s Dillon Rule limitations on local government, something that’s been a sticking-point for Alexandria leadership for years.

“The restrictions of the Dillon Rule can be frustrating and I do not think most people understand how limited local authority is on issues both big and small,” Bennett-Parker said. “This past year, we had to ask the General Assembly for permission to use our own stormwater fee revenue on a grant program to reimburse residents for flood mitigation measures on their properties.”

“Another example is that we do not have the ability to regulate gas-powered leaf blowers, which many residents would like us to do because of both noise and pollution,” she added. “We also frequently hear from residents who want to see us get more affordable housing units through development projects, but Richmond limits local authority regarding what can be required of developers. These are just a few examples — there are many.”

Meanwhile, Levine said there’s also a lot of work left to do on gun control, an issue he’s been outspoken enough on to prompt armed protests outside his Alexandria home.

“I’m still worried about guns and gun violence,” Levine said. “People are using high volume assault weapons. I have a bill that says if you’ve been declared such a danger to society that we want to lock you up, that while you’re out on appeal, you shouldn’t be able to get a gun. There’s a lot more we can do on guns.”

Early voting for the primary is currently underway and the final day for voting in the primary will be June 8.

Read more →
More Stories
Morning Poll: Have You Seen Any Cicadas Yet?Here Are Some of the Rejected Arlington Logo Designs