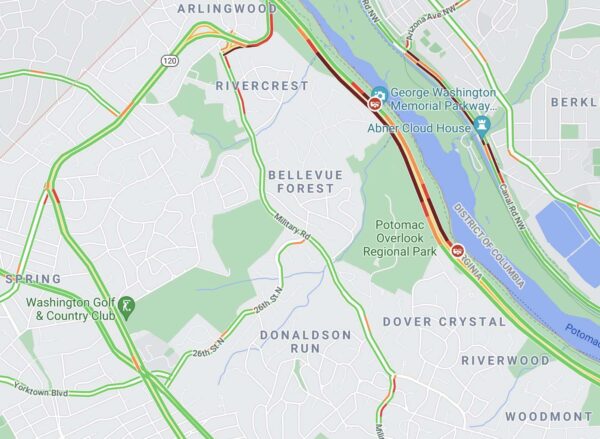 (Updated at 3 p.m.) A crash closed lanes and snarled traffic on the GW Parkway this morning.

Initial reports suggest that a male driver crashed head-on into a tree near the first scenic overlook around 11:30 a.m. Arlington County firefighters were able to get him out of the vehicle; the extent of the man’s injuries were not immediately clear.

As a result of the crash and the emergency response, northbound traffic on the GW Parkway was diverted onto Spout Run Parkway. Heavy traffic and one or more lane closures were also reported on the southbound GW Parkway.

By about 2 p.m. all lanes had reopened, according to Arlington County.

#ARLINGTON: NB George Washington Pkwy near the Scenic Overlooks ALL LANES BLOCKED for the CRASH & RESPONSE on scene with Traffic diverted at Spout Run Pkwy under police direction in #vatraffic, #dctraffic, #mdtraffic.