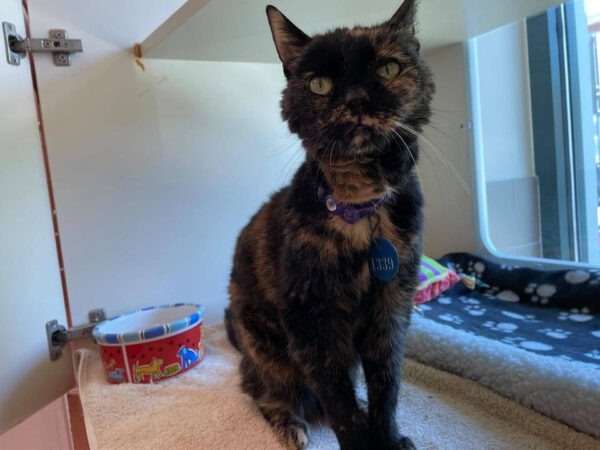 The Animal Welfare League of Arlington put out a call on social media on Wednesday in hopes of finding this very elderly, brown and black, domestic shorthaired kitty a welcoming place to nap and snack.

She was brought into the shelter about two weeks ago, Chelsea Jones of AWLA said, when her long-time caretaker had become too sick to care for her anymore.

Dr. Pepper was accompanied by a note that said she was the beloved companion of a cancer survivor, a Vietnam veteran, and her caretaker’s family for 22 years.

“We’re just all in tears over this cat and this poor family that, unfortunately, is having to be separated because of a really sad life situation,” says Jones. “We are flat determined to find this cat an amazing end-of-life home where she can be loved, pampered, and spoiled for however long she has left.”

Dr. Pepper is, admittingly, quite old. While it’s tough comparing animal ages to humans, it’s estimated that a 22-year-old cat is about the same age as a 104-year-old human.

However, Jones says she’s relatively healthy and only is in need of one pill a day for hyperthyroidism.

Her favorite things are napping, snacking, and getting attention.

“She is just so affectionate and so friendly… she wants to just have someone nearby,” says Jones. “To anyone who comes up to her kennel, she puts her paw up to the glass [like she’s] saying ‘hello’.”

While Dr. Pepper has her moments when she plays like a cat a quarter of her age, she mostly naps, asks for attention, and then goes back to laying down.

“She’s really an easy pet to own,” says Jones.

Since their social media call out about 24 hours ago, there’s been significant interest. Jones says Dr. Pepper has a number of appointments today to meet with prospective new caretakers, plus a foster family has already asked to care for her.

But there’s always room for more and there are plenty of other pets one can adopt at AWLA in case Dr. Pepper finds her forever home prior to your visit. Currently, the shelter remains by appointment only — to schedule an appointment on the League’s website, click the animal you’d like to visit and scroll down to schedule.

Arlington has recently seen a number of cute animal stories. Dr. Pepper’s situation is a sad one, but AWLA is hoping for a heartwarming last chapter to the elder feline’s life story.

“It’s bittersweet,” says Jones. “But we’re going to make sure [she] has a happy ending.”