The first time Matt and Vicky Eichler saw Jazz, she was in a crate coming out of baggage claim at Reagan National Airport.

“They sounded the big siren at Reagan National and she came through the little cargo thing,” says Matt. “And she was born to us.”

Today, Jazz (short for “Jazzmatazz”) is a newly-turned 19-year-old, toothless, miniature dachshund who lives with her caretakers in the Arlington Forest neighborhood. And this birthday girl (her birthday was March 19) has gone Arlington viral. 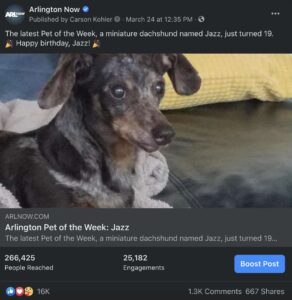 It’s the most viral Pet of the Week post on social media that anyone here can remember. (In terms of readership on the ARLnow website, Jazz was unable to overtake the all-time Pet of the Week pageviews leader, a pet rock named Steven.)

It’s not totally clear why Jazz has stolen the hearts of an NHL arena’s worth of Facebook users, but her caretakers think it’s because she’s lovable, cute, and alive.

Nineteen years ago, the newly-married couple was looking for a dog to carry on the family legacy.

“My family has had dachshunds in their family since 1980,” says Matt. “And Vicky really wanted a dog, so [she] emailed a number of breeders.”

They found a match, but the dog was all the way in Louisiana. So, the young pup took a flight by herself to meet her new family.

So, they named her Jazzmatazz. With her Louisiana origins, Vicky says that the name “totally fit her.”

That first day with her new family was full of surprises.

“We brought her home, went to the backyard, and she instantly knew how to play ball,” says Matt. “It was pretty amazing. She was more than eager to play and push [the ball] back with her nose and chase it down.”

Jazz also didn’t bark in her first days, but that changed, oddly, once she saw herself for the first time.

“She was really quiet. And then she saw herself in the mirror and started to bark for the first time,” says Matt. “Then, we couldn’t shut her up after that.”

A few years later, the Eichler got another addition to their family.

“When we brought [our son] home from the hospital, Jazz welcomed him to the house,” says Matt. “She would pop up on her hind legs and look into the cradle.”

On walks, Jazz was protective of the baby, barking at passers-by.

“She was a good older sister,” Matt says.

As the years have passed, Jazz has slowed down a bit. Her eyes have gradually gotten worse, her hearing is going, and her mobility isn’t great. But she still has a great sense of smell, always tracking down her treats.

“She hops around looking for it,” Matt says. “You’ll throw it for her and maybe she doesn’t quite see it, but she’ll chase it down.”

She’s also a good watchdog. While she used to chase squirrels, rabbits, and chipmunks, she now just barks.

“If you say ‘chipmunk,’ she’d pop off the couch and look out the window,” says Matt.

Though, Vicky adds, “She never caught one.”

Jazz, like all of us, has her routines — she loves walking up her ramp to her favorite spot on the couch, snuggling into a good blanket, watching the Washington Capitals with her parents, and being a lap dog.

Matt and Vicky think that at least part of the credit for her long, happy life is owed to her teeth, or lack thereof.

About 11 years ago, Jazz kept losing teeth due to infections. So, the veterinarian recommended having them all removed.

“So, she hasn’t had teeth in 11 years,” says Matt. “We agree that it’s probably been good for her because we could see that she was not feeling great all the time.”

Despite being toothless, she still eats kibbles, the family says.

Matt and Vicky know that time may be short with Jazz, but they are cherishing every moment with their 19-year-old, toothless dachshund.

Says Vicky, “Every day is a gift with her.”