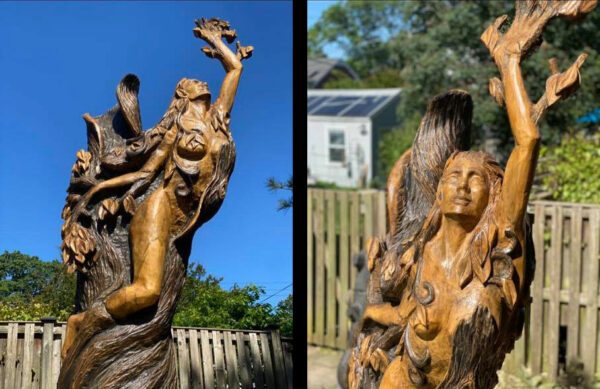 A sugar maple has turned into a breathtaking wood-carved sculpture.

Local artist Andrew Mallon, known for similar artwork in the area, created the Greek mythological scene that shows when Daphne fled from Apollo and turned into a tree.

It’s on a side yard of Mary Maruca’s home on N. Park Drive, in the Arlington Forest neighborhood near Lubber Run Amphitheater.

“The decision to create the sculpture came as I wrestled with the pain of taking down the last of the three old trees that had lived in my yard before I bought my house,” she tells ARLnow.

Sugar maples can live for hundreds of years, and Maruca estimates this was one was a mere 80 years old. But an arborist diagnosed a fungus on it, so she needed to intervene due to its location between her and her neighbor’s homes.

Days before she was going to have the tree removed, she thought about turning it into a sculpture and reached out to Mallon. The timing seemed magical.

Maruca was always struck by illustrator Arthur Rackham’s depiction of Daphne’s escape, and Mallon did his own research, too. Mallon has turned dead and felled trees into sculptures of animals and more. He and Maruca collaborated with their ideas before the artist turned the tree into the art.

“After Andrew completed the sculpture, I also had a sense of another level of its significance — that it also made a state about times of change and what they require of us,” Maruca said. “Indeed, forms may change but beauty remains, and struggle is definitely part of that process.”

Though Daphne is depicted in a state of undress, unlike Rackham’s depiction Mallon gave her some strategic coverings, using meticulously sculpted leaves and part of the tree trunk. That should be more palatable to neighbors than the famous topless mermaid sculpture in Leeway-Overlee — the work of a Frederick, Md. sculptor — which attracted national media attention before being cut down in 2011.