A weekend of bike races, including one of the most difficult closed-road events in the U.S., is on tap this weekend in Arlington.

The annual Armed Forces Cycling Classic is back after being cancelled last year due to the pandemic. The two-day event, which includes pro/am races in Clarendon and Crystal City, will close off roads and restrict parking.

“[The] Armed Forces Cycling Classic’s Clarendon Cup has been the Washington, D.C. region’s premier Pro/Am races since 1998,” the race’s website says. “The famous 1km course will test the athletes’ skill and stamina, as it carries a reputation as one of the most difficult criterium races in the U.S. due to technical demands of the course and the quality of the participants.”

Police will close the following roads in Crystal City from approximately 2 a.m. to 5 p.m. this Saturday, June 5, for the event. 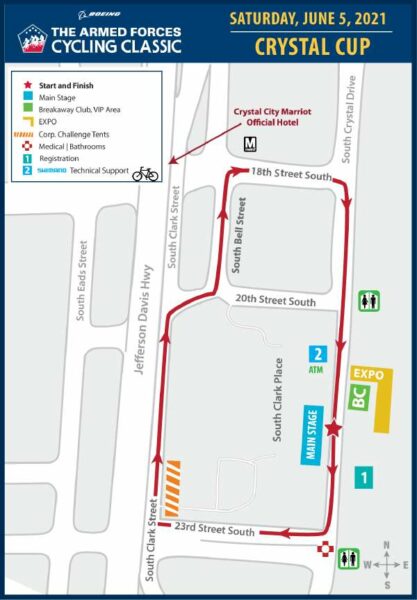 For Clarendon, roadway closures will run from approximately 3 a.m. to 4 p.m. on Sunday, June 6, according to ACPD. 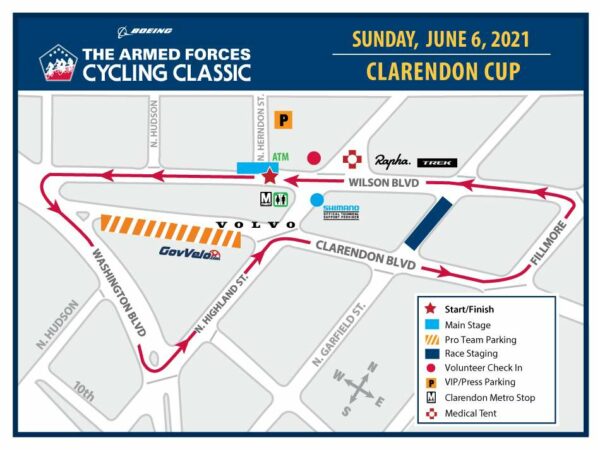 Apart from the races, the Armed Forces Classic features a Challenge Ride that’s open to military members and corporate groups. Registration — now closed — is linked to a participant’s service branch and status, including active duty, reservists and veterans. Riders of all abilities also participate in the closed course to see how many laps they can complete.

In preparing for this year’s event, organizers created a wave format to adhere to the Virginia’s now-former COVID-19 restrictions. Instead of 1,500 participants for the ride being released at once, they’ll start in groups.

The new system is still being used because organizers realized it might be a better way to conduct the rides, the event’s founder, Rob Laybourn, said.

“It’s kind of a COVID silver lining,” Laybourn told ARLnow. “We’re kind of excited to see how it works.”