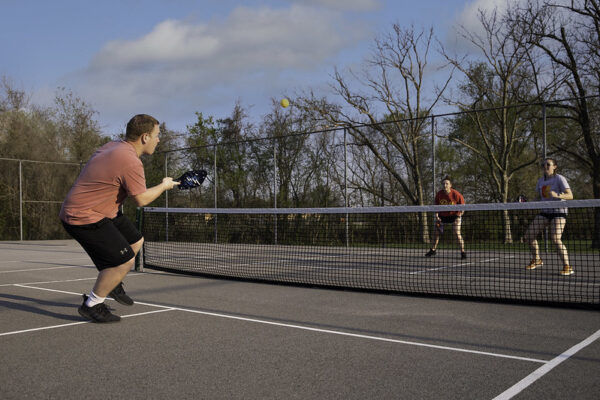 Arlington’s pickleball players, eager to see the sport grow, will soon have more courts to play on.

The YMCA Arlington Tennis & Squash Center, at 3400 13th Street N. in the Virginia Square area, is repainting three tennis courts to make room for six pickleball courts. This change is part of an effort to meet the growing demand for facilities as the sport gains popularity.

“In the D.C. region, pickleball is exploding,” said Carlo Impeduglia, Associate Director of Racquets at the Y in Arlington.

He attributes the local and nationwide surge in interest in pickleball and other racquet sports to people searching for social sports where players can stay distanced during the pandemic.

The new courts at the Y facility will feature blended lines and changeable nets so players can choose either tennis or pickleball, Impeduglia said. Currently, the tennis courts have pickleball lines taped on.

Members will be able to reserve courts and participate in drop-in play, instructional clinics, socials and special events, he said. More permanent courts could be added in the future, too.

The changes come as the YMCA (3422 13th Street N.) seeks to upgrade its facilities in Arlington, replacing the Y as well as tennis and squash center with a seven-story tall apartment building and three-story tall facility that has a swimming pool and tennis and pickleball courts.

At the regional level, the YMCA of Metropolitan Washington is jumping on the craze and opening pickleball courts throughout the D.C. area. Other new courts can be found at the Y’s locations in Bethesda-Chevy Chase and Silver Spring.

“The response to pickleball has been overwhelming by our membership,” said Pamela Curran, Executive Vice President and Chief Operating Officer for the YMCA of Metropolitan Washington. “Pickleball is the perfect pandemic sport since people can still socially distance and get great exercise both outdoors and indoors at an extremely affordable price.”

Adrie Custer, the moderator of the Facebook group Pickleball Friends of Arlington, Virginia, said she has also seen a surge in interest. The group was founded in 2016 and today has more than 430 members — but nearly 200 of those members joined in the last year, she said.

“Once someone actually plays pickleball, they are hooked,” she said. “We expect our numbers to keep climbing. I believe it’s true that pickleball is the fastest-growing sport in America. It is a game that can be played enjoyably at many skill levels and by people of all ages.”

Players typically are 50 years of age and older, but Impeduglia said he has seen and heard of kids as young as 4 and seniors as old as 90 hitting the courts.

“It’s really all ages, all levels,” he said. “The sport has no boundaries.”

Nationally, the sport grew 21.3% to 4.2 million players in 2020, according to the USA Pickleball Association.

Arlington County Parks and Recreation provides indoor as well as outdoor courts for the sport, and classes are available for young players, too.

The county has added pickleball lines to multiple courts over the last few years and noticed an increase in overall use in parks amid the pandemic.

“The pandemic has not seemed to slow its growth,” county parks department spokeswoman Susan Kalish said of the sport. “It’s definitely popular in Arlington and the region in general.”