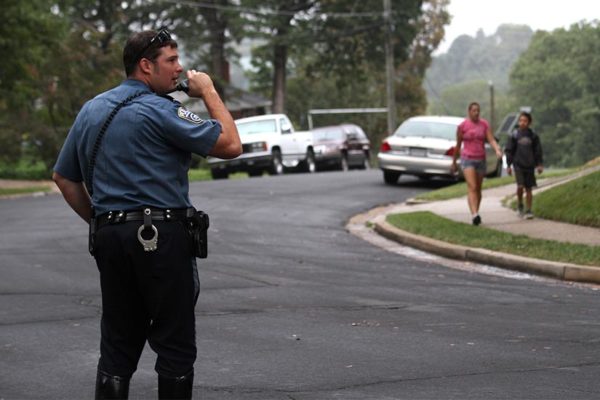 (Updated at 10:35 a.m.) A public-records request sheds light on how the Arlington County Police Department justified a change to what the public can hear via police radio channels.

The Freedom of Information Act inquiry by ARLnow uncovered documents about the department’s March change to encrypt more radio chatter. The documents cited safety and security concerns, including some related to last summer’s police reform protests and the Jan. 6 breach of the U.S. Capitol.

Whereas the public — including news outlets like ARLnow and local TV stations — used to be able to hear more details about a police incident in progress in Arlington, now in most circumstances only the initial dispatch and basic information from the scene can be heard.

“Once a call for service is stabilized, it may be moved to an encrypted channel to protect the personal and confidential information of members of the public interacting with law enforcement and for tactical, operational and investigatory security reasons,” Arlington police spokeswoman Ashley Savage said in an email.

Authorities drafted a policy and created a memo in February after a workgroup focused on police radio traffic hashed out details and the department’s now-permanent police chief, Charles “Andy” Penn, wrote that he expected “questions/complaints” about the encryption.

The Feb. 23 police memo gives information about why the department encrypted an administrative channel and details that other channels were encrypted, too, including special ops for presidential and dignitary escorts and other special events, a civil disturbance unit’s operational channel, a frequently-used “talk around” channel for officers on the scenes of incident to communicate with one another, and an outreach zone channel involving school resource officers.

Authorities shared their reasoning in wanting to encrypt more channels, noting police in Illinois and Texas heard on their radios the hip-hop group N.W.A.’s anti-police song — apparently transmitted by someone with access to a radio capable of broadcasting on police channels — amid nationwide protests following the police killing of George Floyd in Minneapolis in May 2020.

“During the summer of 2020, protests and civil unrest across the country highlighted the growing threat to public safety communications and exposed its loopholes,” one email said. “Factions in Dallas and Chicago targeted these vulnerabilities by playing music over unencrypted radio channels, preventing legitimate use. This sort of tactic threatens both public safety personnel, who rely on the radio to communicate with each other, and the general public, who are in potential danger during an incident.”

An Arlington County document also stated that the deadly Jan. 6 Capitol rioting also involved bad actors trying to gain access to police radio systems to cause disruptions. Additional details were not given in emails obtained by ARLnow, some of which were redacted.

“We also took into consideration the events of January 6 as we witnessed bad actors actively trying to gain access to radio systems to cause disruptions,” one email said.

When asked about the alleged Jan. 6 police radio incident, Savage said Wednesday in an email that they weren’t aware of this happening on ACPD’s own channels. In D.C., Metropolitan Police Department also noted they didn’t observe this.

But ACPD’s emails did cite unspecified incidents in which individuals used police transmissions to create disruptions.

“We have experienced numerous occasions where individuals created problems for first responders by having had access to information conveyed over unencrypted channels,” the department said in drafting its policy. “This includes but is not limited to people coming to scenes and disrupting or causing delays in the handling of the call.”

Without the added encryption, authorities say criminals could have advanced warning of police actions, citizens could arrive at a scene before emergency responders, and law enforcement tactics and movements could be compromised.

Savage said all dispatched calls for service, including emergencies such as an armed robbery or school shooting, are broadcast over the primary radio channel, which is not encrypted and available for monitoring by the media or interested members of the public, using either commercially-available scanner radios, online services or smartphone apps.

“Recognizing that the circumstances of each incident is unique, officers and supervisors have discretion to take an ongoing investigation onto a secondary channel to protect the privacy of involved parties, ensure the integrity of operations and investigations, and reduce the unintentional disclosure of tactical information,” Savage said, noting the department is committed to transparency.

“While some may view encrypting radio channels as a means to limit public access to governmental operations, encryption is designed to regulate the timing and flow of information while minimizing the safety concerns facing citizens, public safety personnel, and the community during an ongoing and fluid incident,” a county document said.

Arlington officials have been aware of the public’s interest in knowing about its involvement at a scene as well as privacy concerns.

That included a communications manager with the county’s Public Safety Communications and Emergency Management Department, who helped draft the policy and had encountered a debate in Montgomery County, Maryland about police encryption, with Leonzo Williams, a retired major with Fairfax County police, noting concerns.

In a shared forum for public officials, a California police lieutenant also shared last December his state’s Department of Justice required an encryption plan by the end of 2020, citing issues over personally identifiable information.

“Paramount in our discussion is the balancing of transparency and the public’s right to know and the individual’s right to privacy and their personal safety,” Arlington County said in drafting its policy. “In the world of cyber, the transmission of an individual’s personal information and/or address leaves them vulnerable.”

Some of emails discuss concerns about interoperability between Arlington’s encrypted channels and other local, state and federal law enforcement agencies, which might not have the encryption keys needed to communicate with Arlington officers at a scene. Such issues were being worked out, thanks to a “National Capital Region Interoperable Encryption Plan” that allows communication between agencies using an older encryption standard.

“Several of our alternate channels continue to remain unencrypted, ensuring we can communicate effectively with our regional partners during incidents that require a multi-jurisdictional response,” an email also notes.

The county acknowledged that regardless of the new encryption, information would still be subject to public review.

“While encrypting communications prevents immediate retrieval by the listener, all Arlington County system radio traffic is recorded and retrievable through Freedom of Information Act (FOIA) or internal investigations, so that any inquiry from the media or public [is] properly answered and the radio recordings provided.”