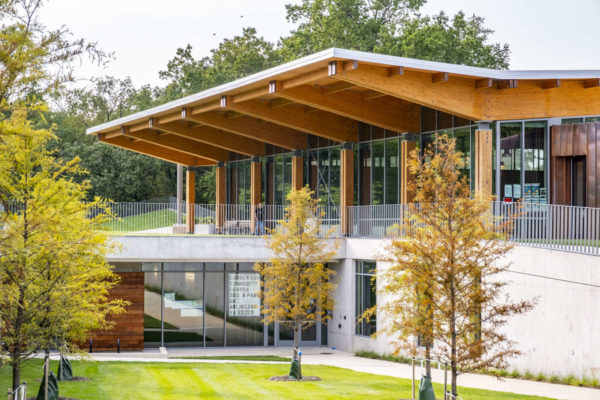 The new Lubber Run Community Center, which operated as a vaccination clinic this spring, will open for its intended purpose on Tuesday, July 6.

“After opening the park in fall 2020, and now that the vaccination clinic has ended, it’s time to prepare to open the new center,” the Department of Parks and Recreation said in an email. “Come by the gym, fitness center and indoor track.”

Fitness memberships are required for those working out at the center.

Construction started on the new community center in 2018. It was set to open in late 2020, but due to budget cuts the opening of the community center lagged behind that of the park’s playgrounds and courts, which made their debut last September.

At the time, the county said the community center would open “sometime after July 2021, which is the start of the County’s next fiscal year.”

Before the official opening, the customer service desk will be open from 8 a.m. to 5 p.m. starting next Monday (June 21). Staff will be available to accept forms for in-person summer camp, fee reductions, facility rentals and program and class registrations.

“Shortly after the facility opens, we will host a ribbon-cutting and community celebration,” according to the email, which added that more information on this event will be announced later.

The parks department did not hold a ribbon-cutting for the playground and courts when they opened in September due to the pandemic, Arlington County Dept. of Parks and Recreation spokeswoman Susan Kalish previously said.

This summer, the hours for the center will be 8 a.m. to 8 p.m. Monday through Friday, and 8 a.m. to 5 p.m. on Saturday. Those operating hours are set to be extended later this year.

“This fall, the center will be open later, and on Sundays too,” the email said. “Indoor programming, such as the senior center and preschool, will return this fall.”

The community center and park at the intersection of N. George Mason Drive and N. Park Drive is across the street from Barrett Elementary School and is walkable from Ballston. Parking is also available.