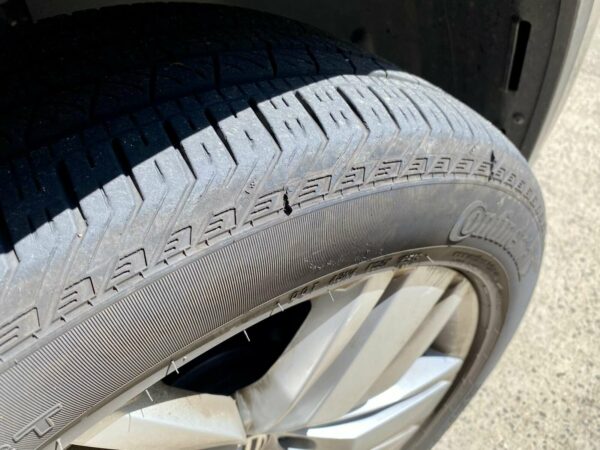 A North Arlington neighborhood is on alert after someone deflated tires on at least five SUVs in the name of environmental justice.

The incident happened after midnight on Friday, June 18, along the 4600 block of 37th Street N. in the Old Glebe neighborhood.

“At approximately 12:45 a.m. on June 18, police were dispatched to the report of a vehicle tampering,” Arlington County Police Department spokeswoman Ashley Savage tells ARLnow. “Upon arrival, it was determined that the victim’s two vehicles, which were parked in their driveway, had air pressure released from the rear driver side tire.”

“Officers canvassed the area and located three additional vehicles with tampered tire pressure,” Savage continued. “A flyer, allegedly left by the ‘Climate Liberation Front,’ was located on the windshield of the involved vehicles. The investigation is ongoing.”

As mentioned on a Nextdoor thread about the tire deflations, the note left on the vehicles (below) was almost identical to that left on SUVs in Sweden in 2007.

We have deflated one or several tyres of your SUV. Don’t take it personally. It’s your car we don’t like. You are certainly aware of the large amount of fuel it consumes. so we don’t have to enlighten you about that. But either you are ignorant of, or you don’t care about the fact that all the gas you consume by driving around in your SUV in the streets of the city has devastating consequences for others.

Scientists are entirely sure that we are very close to pushing climate change over a threshold, into a phase where it will be totally out of control and cause irreversible damage.

When the glaciers melt, people’s source of water disappear. When the deserts spread. agricultural fields become uncultivable. When the sea level rises, homes are inundated. Result: billions of refugees, countless deaths. It’s already estimated that 150,000 people die every year due to the effects of climate change, according to the WHO. As an affluent American you will survive longer then [sic] most. Those most vulnerable, and already worst afflicted by the global warming caused by Northern affluence, are the people of poor countries. In the end, however. climate chaos will affect us all, poor people as well as rich.

This does not have to happen if we impose a radical cut on carbon emissions. Now. Not tomorrow. That’s why we have disarmed your SUV by deflating the tires. Since you live in a city with a functioning and accessible public transportation system you will have no problem going where you want without your SUV.

Savage said the police department has so far had no other reports of similar incidents. The department encourages anyone whose vehicle has been tampered with to call the Arlington non-emergency line at 703-558-2222 or to file a police report online.

The tire deflations attracted more than two dozen comments on Nextdoor. Some questioned the wisdom of inconveniencing residents as a method of fighting climate change.

“Do they think you’ll just wake up with flat tires and buy a Prius?” one person asked.