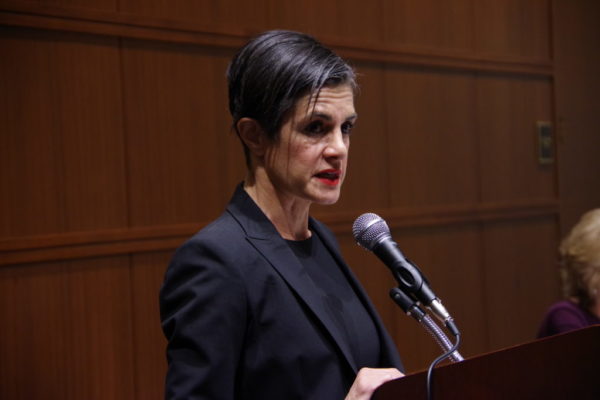 Arlington’s top prosecutor said she is working with Arlington County Police Department to establish a multi-agency cooperative effort to tackle the carjackings and vehicle tamperings here and in the D.C. area.

“My philosophy has always been to focus on crimes that are a public safety risk,” Commonwealth’s Attorney Parisa Dehghani-Tafti tells ARLnow. “Car tamperings and car thefts, I don’t look at those as simple ‘property crimes’ because those are things that make people feel vulnerable and set people up for dangerous situations.”

Dehghani-Tafti, who was elected in 2019 on a platform of criminal justice reform, said she has been following the theft and tampering trend and looking for patterns. She said she has also been encouraging early and constant communication between her office and ACPD, while the two are working with other Northern Virginia and Maryland jurisdictions and some federal agencies.

This coordination may turn into something like a task force. Talks about one began in February, and she said officials will soon be able to announce some kind of organized intra-jurisdiction response.

Dehghani-Tafti said that is playing out across the river in D.C., which saw five times more carjackings in the first quarter of 2021 than the same period in 2020. Similar sprees are occurring in Montgomery County, Prince George’s County and Howard County, she said.

“We’re seeing this across the country, whether or not a reformer is in office or the county government is progressive or not,” she said.

And Dehghani-Tafti said she has reason to believe the car thefts are organized. A few weeks ago, she drove around with ACPD detectives to see what they see and maintain the collaboration she said is needed to tackle more organized crime sprees.

“The carjackings started to look [organized] when a few people were arrested in February and March and the instances went down dramatically in all the jurisdictions in the D.C. area,” she said.

Good morning peeps. Up since 3am and out with ACPD auto detectives getting their in the trenches perspective on what’s happening with the car thefts, working together on investigations, and checking out the old school radio. Seriously, lock your doors please. pic.twitter.com/aJkmkLv8Jh

Her office has one person whose job is to provide early assistance to ACPD and other agencies as they build carjacking and tampering cases. The sooner law enforcement agencies reach out, the sooner her office can support officers as they ask for search warrants, gather evidence and build cases.

Such a collaboration “adds value and context of a case” to investigations “so that we don’t take things that are serious insufficiently seriously and we don’t overreact to cases that are not within the organized pattern we are seeing,” she said.

“The criminal-legal system is a blunt tool, and what we’re trying to do is make it more surgical,” she said.

That approach does not mean she is “soft on crime,” she argued, but that she is going after the right people.

By way of example, she cited the number of significant theft cases between the start of 2020 and March 2021. Dehghani-Tafti said there were 55 grand larceny cases, 20 of which involved juvenile suspects. Of those, nine were felonies, eight were misdemeanors, and two were dismissed and one was pending.

“We haven’t seen recidivism among those juveniles,” she said. “We took things with the right amount of seriousness for those cases. We can only do it with the information we have available, which is why we’re trying to increase the speed with which information flows so that we can make the best decisions we can.”

Among the adults, 10 were dismissed because of evidence issues and 12 cases are pending. The court determined two were felony cases, four were misdemeanors, and one had charges resolved to enter drug court while another was found to have “a competency issue,” she said. The rest were resolved with charges elsewhere — including one in federal court that resulted in a 12-year sentence.

“It’s factually incorrect to say we’re letting these people go,” she said, pushing back on some community members who believe insufficiently aggressive prosecution is at least partially behind the rise in vehicle-related crime.

“We can’t do anything about someone who is not caught other than help investigate,” Dehghani-Tafti said. “If you look at the actual cases over a snapshot of 15 months, there’s no ‘letting people go’: It’s because of evidentiary issues, or the defendant died — actual reasons having nothing to do with letting someone go.”

The length of time it took her to get a hold of those numbers, however, reinforced for her the importance of overhauling her office’s case management system so that it can perform that kind of analysis quickly, providing clearer data on cases and prosecutions for public dissemination.

“Most prosecutor offices don’t produce the kind of data the public is looking for,” she said. “We’ve been working on getting our system to a point where it’s functioning properly.”

Her office is currently working to overhaul the management system, install software that can effectively crunch the system’s data, and hire a person to oversee analysis projects from start to finish, Dehghani-Tafti said.

Arlington could get a public safety dashboard, she said, but that would require careful explanation of data, as even one or two more or fewer cases in Arlington could misleadingly look like a big statistical difference.

“The big thing on the horizon is getting to a place where we can at least retrieve this information and, hopefully — if it’s viable and makes some sense — share that publicly,” Dehghani-Tafti said.