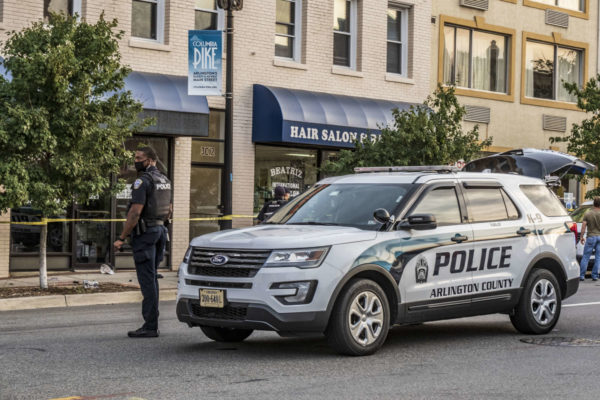 As COVID-19 cases surged in Arlington County last year, so did carjackings, assaults, trespassings and opioid overdoses, according to a new annual report from Arlington County Police Department.

Overall, the report paints a mixed picture of a relatively flat crime rate for those against property and society, or “Group A Offenses,” compared to 2019. It also shows a drop in the number of arrests for less serious crimes such as trespassing, loitering and drunkenness, or “Group B Arrests.”

But the report highlights a few key crimes that rose or fell, partially due to the pandemic. It also addresses at length the rash of carjackings — which started ticking up in 2019 and have continued in 2021 — and ACPD’s response.

Penn said these car thefts and tamperings are playing out across the D.C. area and nationwide. ACPD investigated 16 carjacking reports in 2020: eight were solved with arrests or with the identified suspect being held in another jurisdiction.

Most of the carjackings were concentrated in Crystal City and Pentagon City. In response, ACPD poured more resources into these neighborhoods last year and earlier this year, which the department said in March appears to be working.

Thieves tend to target unlocked vehicles in neighborhoods, Toyotas and Hondas (for their parts) in open-air parking lots and those left running unattended or parked with keys inside, according to the report.

Assaults, meanwhile, reached a sustained three-month high from July through September before declining. They were concentrated in populated areas and in transit corridors, the report said.

“This temporal pattern was similar to other offense types this year, likely related to COVID-19 closures,” according to the report. “Domestic assault and battery offenses against a family or household member increased by 38 cases (14.6%) compared to 2019 and were a significant contributor to the increase in simple assaults.”

Although ACPD’s report does not specifically link domestic assault to the pandemic, at least one study does.

While crimes against people have been increasing since 2018, Arlington’s violent crime rate continues to be less than half the statewide rate, the report said.

Lastly, ACPD investigated 20 fatal overdoses and 54 non-fatal overdoses in 2020 — more than any other year since it began actively tracking incidents involving opioids in 2014, the report said. The total, 74, matched the number reported at the peak of the opioid epidemic in 2017, and involved heroin and prescription painkillers mixed with fentanyl.

“While the investigation into these incidents revealed no direct evidence that the increases are fueled by the COVID-19 pandemic, it is likely a factor given the timing, the loss of income and jobs and the isolation of stay-at-home orders,” the report said.

COVID-19 may partially explain the increases in assaults and thefts, but it may also have contributed to a sharp decline by 27% in “Group B” arrests. Leading that drop were drunkenness (42%), driving under the influence (13%) and liquor law violations (68%).

“These declines are likely indicative of COVID-19 business closures and reduced hours of operation, decreased public consumption of alcohol, success of increased enforcement, advocacy and better utilization of taxis, ridesharing and other transportation options in reducing DUI behavior,” the report said. “Alcohol-involved traffic collisions were reduced in 2020 to the lowest levels in recent years.”