(Updated at 10:55 a.m.) The Arlington County Police Department has released its annual report, which paints a mixed picture of rising overall crime with decreases in certain types of offenses and a shrinking police force.

ACPD’s 2019 Annual Report says that crime in Arlington “remains historically low,” but the county “experienced an overall increase in 2019 which was marked particularly by vehicle-related property crimes.” Over the past year police have responded to a string of vehicle break-ins around the county, but have also been making arrests.

“The work of officers to proactively patrol Arlington’s neighborhoods to identify and prevent criminal activity and conduct follow-up investigations resulted in a number of significant arrests,” the report says. 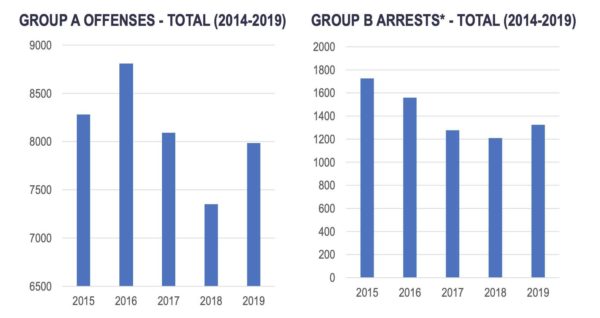 The year saw increases in the number of reported simple assaults, motor vehicle thefts, larcenies, robberies and public drunkenness charges. There were decreases in sex offenses, abductions, prostitution charges, and DUIs. Murders fell from four in 2018 to two in 2019.

The police force shrunk, albeit slightly, from 2018 to 2019 amid recruiting challenges. The new report lists a sworn police force of 343, down from 353 the year prior. Both figures are below the authorized sworn force of 370.

In order to provide the best professional law enforcement services to the Arlington Community, we strive to hire personnel that reflect our community’s demographics. Our Personnel and Recruitment Unit works diligently to seek individuals from all backgrounds who possess the necessary qualifications to serve Arlington. While we recognize the police department’s demographic data does not perfectly match that of the Arlington community, recent hires since January 2018 show a positive trend towards aligning more closely with our demographics. The Department requires sixty semester hours of college credit or prior military or law enforcement service, however, a significant majority of our sworn staff hold a Bachelor’s degree or higher.

Written amid nationwide protests over police killings, as well as local calls for police reform, the report contains a letter from Chief M. Jay Farr pledging to do more to win the trust of Arlingtonians.

While the department has a longstanding history of proactively engaging with the community, we recognize there is still more work to be done to ensure the trust and confidence of those we serve. The tragic death of Mr. George Floyd has sparked a national conversation around policing in America. We are committed to continuing to work with the community to hear your concerns, build a diverse workforce, train our officers to de-escalate situations, and ensure accountability and transparency. I can assure you that each and every day, our officers work to provide the level of service that is not only expected but reflected by this community.

Farr is planning to retire by the end of the year.