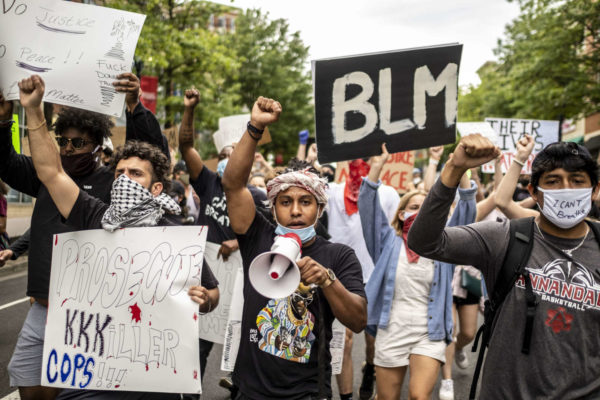 At the start of the public hearing on June 13, County Board Chair Libby Garvey emphasized that the Board’s rules state there could only be one speaker on any given topic or stance, but that’s not now the public comment portion panned out as dozens of speakers rallied to argue against policies activists said were still deeply rooted in the County’s history of segregation.

Yolande Kwinana, founder of a newly formed group called Arlington for Justice, followed up on an earlier discussion with Police Chief Jay Farr by bringing many of the concerns about policies and funding to the County Board.

Kwinana highlighted the demands of a campaign called 8cantwait and urged the county to move forward with the implementation of body cameras and citizen review panels with the power to subpoena the police.

“Invest in our community over law enforcement be reallocating resources to community programs and mental health services,” Kwinana.

Garvey responded that many of Kwinana’s suggested reforms were already in place, without specifying which ones, and tried to move forward but was immediately confronted with more public speakers discussing police reform. Daniel Weir, a member of the Planning Commission, tried to speak about police reform but was cut off by Garvey, who told him to save his comments for another occasion.

County Board member Christian Dorsey suggested a compromise of allowing speakers like Weir to discuss specific facets of reform rather than a broad call for changes to policing.

“The underlying problem isn’t the bad apples, it’s not specific to policing,” Weir said. “[Racism] spreads like mycelium into every decision. Any institution that doesn’t actively resist these things will [have racism] affect decisions. We must be required to take anti-racism training and memorialize the racial impact of every action.”

Other speakers challenged the Arlington County Police Department’s past use of deadly against people in a mental crisis or said the department should do more to require and codify de-escalation techniques.

“We can make Arlington safer by adopting specific rules,” said Wells Harrell. “Eight can’t wait. I call on this Board to put it on the agenda for the next meeting and vote yes.”

During the County Board’s discussion after the meeting, Board members thanked the speakers but also discussed being in a difficult situation of recognizing the concerns without vilifying the police — who are already in the spotlight after participating in the removal of protestors from Lafayette Square earlier this month.

“Judge people by what they do,” Garvey said. “We’re not perfect, we need to get better, but our police are working very hard and to see them swept up into this national narrative is a little painful for us and for them. But yet, people are pointing out some areas where we need to improve and to make sure people are comfortable.”

Garvey said the County Board will work to put together a public forum about proposed reforms for the police department.

“We want [this moment] to turn into a movement,” Dorsey said. “I hope for sustained activism beyond today.”