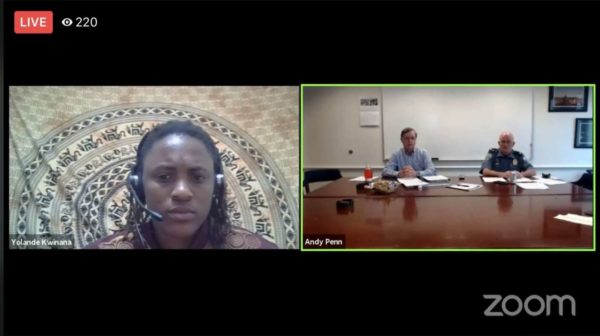 The ACPD brass discussed ways the department can make progress towards reform and some areas where the department has hit stumbling blocks during the course of the livestreamed discussion But the interview started with officials defending the shooting of Alfredo Rials-Torres and talking about areas the department can improve.

In May 2015, the 54-year-old man was fatally shot by an Arlington officer during a domestic violence call involving the man’s mother. The shooting was used as a jumping-off point for a discussion of how Arlington police handle the use of force.

Kwinana discussed eight reforms suggested in a campaign called 8cantwait and asked the brass how those goals would fit in with the department. The goals are:

Deputy Chief Andy Penn addressed each of those points, saying that many of them are already implemented. While Farr did not say there was a explicit ban on chokeholds or strangleholds — like the ban currently being considered by the Minneapolis Police Department following the killing of George Floyd at the hands of four Minneapolis officers — Farr said police are not allowed to obstruct or block any airways.

Per No. 6, Penn said policy is not to shoot at moving vehicles, but that there are exceptions.

“The only exceptions are if someone in the vehicle is shooting at an officer or if the vehicle is charging at someone and no other option exists,” Penn said. That’s what happened in 2017, when two officers shot and killed a man who pinned one of the officers with his pickup truck, and in 2019, when a man was shot and wounded by police after he allegedly tried to ram an officer with a van, a charge his family disputed.

Penn said the department would be looking at “tightening up” the language around requiring officers to report incidents of other officers using excessive force.

“We need to add language that if you see [someone] do something, you’re obligated to report it,” Penns aid. “We need to consider language tweaking.”

Kwinana also pressed Arlington police on transparency, asking why Arlington does not release information about how many complaints are filed against officers. Derek Chauvin, the officer charged with second-degree murder for George Floyd’s death, had 18 prior complaints filed against him.

“It also becomes a personnel matter,” Penn said. “Everything can’t be shared. We’re happy to provide aggregate data but with personnel, that’s a legal issue with privacy. You won’t find individual names.”

Farr said while there are no independent review boards for use of force in Arlington, that’s something he’s willing to explore.

“One thing willing to consider, but we haven’t looked deeply into it: Fairfax county has post-investigative effort,” Farr said. “Fairfax police conducts an investigation for more serious things and they present to the commonwealth, but when that case is done, a group of citizens are given opportunity to look through the case in great detail and make recommendations in great detail back with what worked well, what didn’t work well.”

Farr said he liked the model because it has citizens who are willing to learn and understand the law and requirements of the state look over the information independently.

“They clearly have to know what they’re looking at and assessing,” Farr said. “They do extensive training with these volunteers so if they look at the case they understand the policy and they understand the law. What we don’t want… someone who doesn’t do this for a living, their emotional response will be whatever it is before all the facts come out.”

Farr also reiterated earlier assertions that Arlington police did not violate any department policy during the action by riot-clad officers on Monday to clear protestors away from Lafayette Square in D.C. The officers were there on a mutual aid request from U.S. Park Police.

“If the only reason my officers had gone over was to remove protestors for the photo op, we would not have sent them,” Farr said. “You can take this for what it’s worth: when we sent officers to back up police, any time we sign people to work for that agency, they’re under the command and control for that agency and its mission.”

Farr said in reviewing footage, he watched to see if any officers violated policies. The officers seen attacking people with shields, he said, were not ACPD.

The interview also briefly touched on body cameras, which Farr said he was in favor of, but which have been considered cost-prohibitive in earlier budget discussions.

“It’s extremely expensive,” Farr said. “The County Board, after getting all the facts, made the decision not to fund them.”

Farr said the total for the first year of using the body cameras was $2.5 million, which he attributes primarily to regulations requiring departments to retain terabytes of data for years, in addition to the cost of new full-time employees to manage the data and the cost of the cameras.

“It’s the cost of the data storage that really kills us,” Farr said. “It’s a lot of money. Every year we add more data to that, terabyte after terabyte, and have to retain because retention laws are antiquated and based on old paper rules. We want to do it, it’s very expensive, and it’s got to become a priority for the board to move forward.”