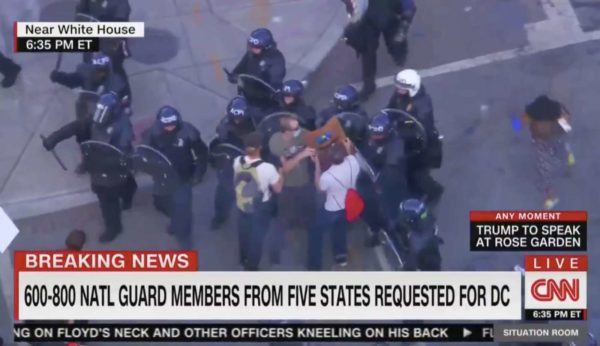 (Updated at 10 a.m.) Despite what you might have seen on TV, the Arlington police officers who were sent to assist the response to protests in D.C. conducted themselves professionally, county leaders say.

In a half-hour phone interview with ARLnow, Police Chief M. Jay Farr, County Board Chair Libby Garvey and County Manager Mark Schwartz discussed the decision to send officers to help U.S. Park Police in D.C., and the subsequent decision to bring them back to Arlington — which is facing criticism from the local police association.

The origin of what has become a national news story started Saturday night, when U.S. Park Police — facing mounting officer injuries and exhaustion from guarding Lafayette Square, near the White House, amid large-scale protests over the death of George Floyd — formally made a mutual aid request for Arlington County Police to assist 0n Sunday. Such requests are common in the multi-jurisdictional D.C. region, and made for everything from suspect searches to large events like an inauguration.

“The numbers and the amount of protests had accelerated to the point that they definitely could use our assistance,” Farr said. ACPD was also asked to help fill in for USPP by patrolling the George Washington Parkway. Alexandria and smaller local jurisdictions were not asked to provide

Farr agreed to the requests, Schwartz and Garvey were informed and concurred with the decision, and on Sunday Arlington officers in riot gear made their way to the District.

The officers were held in reserve for much of the day but at night, as peaceful protests gradually gave way to violence and destruction, they were called to help push protesters back, allowing D.C. firefighters to battle several fires, including at St. John’s Church. Live news footage showed the officers in their ACPD riot helmets, maintaining a perimeter as objects were thrown in their direction,

On Monday, Park Police asked ACPD for another day of aid, pending the arrival of backup from other federal law enforcement agencies. Dozens of USPP officers had been injured in the protests, out of a force of about 300, Farr said. Arlington again agreed to the request. But this time turned out to be different.

A harbinger, Schwartz said, was a conference call President Trump held with the nation’s governors, in which he told them that “you have to dominate” to control the protests.

“It was a disturbing phone call,” said Schwartz. But it wasn’t until shortly after he read about the call that word reached him about what had happened in front of Lafayette Square.

It was 6:35 p.m when police at the park, including Arlington officers, started to suddenly move toward the crowd, which had to that point been mostly peaceful.

Live coverage on CNN showed Arlington officers on left side of the screen, forcefully but steadily pushing back a small group of protesters. To their right, other riot gear-clad officers — Farr believes at least some of them were Park Police — shoved members of the crowd much more aggressively. Cloud-spewing munitions were fired, which some believed to be tear gas, something USPP denied Tuesday.

Shortly after protesters were pushed out of the way, President Trump walked out of the White House, walked to the fire-damaged church, held up a bible as photos were taken, and then walked back.

Here's the moment where police fired teargas into a crowd of peaceful protesters in Lafayette Park, just minutes before Trump's address in the Rose Garden. pic.twitter.com/KPjxMKdDyx

Pres. Trump walked from the White House, across Lafayette Park, to the historic St. John’s Church Monday night. In front of the boarded up building, damaged in protests sparked by the death of George Floyd, Pres. Trump held a bible in hand and posed for a photo with staff. pic.twitter.com/X40Re3Zori

Ahead of @POTUS's arrival at St. John's Church yesterday, armored police used tear gas to clear hundreds of peaceful demonstrators from a nearby park.

Authorities also expelled at least one Episcopal priest and a seminarian from the church’s patio.https://t.co/zmsKKiVJP9

Outrage followed on social media. Images of Arlington officers in the midst of the fracas, including one holding a pepper ball gun (as seen above), started to make the rounds.

“This is absolutely not what our tax dollars should be used for,” one local tweeted. “Nothing about this made Arlington or DC safer.”

When what had happened started to become clear, a decision was made among Arlington leaders to remove county officers — who had then gone back to a reserve role behind the front lines — from the District. Schwartz made the call, telling Farr to bring the officers home, a rare direct order from the manager to the police chief.

“Suddenly we realized that they were in the middle of an event where they were endangered, the people there peacefully demonstrating were endangered, and the whole point was so the president could have a photo op,” Garvey said. “To use our police force in that way, I agreed with the manager that it was an absolute abuse of the [mutual aid agreement].”

Garvey broke the news via Twitter just before 9 p.m. “We ordered @ArlingtonVaPD to immediately leave DC,” she tweeted.

Despite how it might have looked, Farr said he reviewed the footage and believes that Arlington officers acted professionally and in accordance to their extensive civil disturbance training. No Arlington officer fired rubber bullets or deployed tear gas, he said, and the clouds seen on TV were from smoke canisters deployed by other officers.

(Alexandria police noted on social media that their officers were not in D.C. Farr said that is because they were not asked, as the department lacks the civil disturbance training that Arlington officers receive.)

The most aggressive action by an Arlington officer was in self defense, said Farr — one officer fired a pepper ball at a protester who was allegedly armed with a brick.

Garvey said going forward “there might be more Board involvement” on mutual aid decisions.

“We had signed up for something that was perfectly reasonable,” Garvey said. “We wanted to help our neighbors, to help keep people safe. And suddenly we found that we were involved… in a totally different situation. I absolutely agree that our officers behaved professionally, and I personally feel terrible that we put them in that position.”

“It is a very caring, hardworking police force every day,” she continued. “And whenever people try to lump [them in with] the bad behavior we see somewhere else nationally and across the river, it just breaks my heart.”

“U.S. Park Police is a professional agency and I have no doubt that if we asked them for an asset that they would” provide it, Farr said. “They were very complimentary and very appreciative of the fact that we engaged with them on Sunday, they were really hurting on Sunday. My conversations with Park Police… they fully understand and I don’t anticipate it will damage our relationship, but it is a challenge.”

A statement signed by Schwartz and the County Board, however, says the county’s mutual aid agreements will now be up for review.

“Arlington still believes that our regional mutual aid agreements are beneficial to our community and to our neighboring communities,” the county statement said. “But the Manager, the Police Chief and the County Board will be re-evaluating those agreements to ensure that our police officers, of whose efforts to reflect the values of our community we are proud, are never again put in a situation where they are asked to take action that is inconsistent with our values.”

In all, 53 ACPD officers and four fire department medic personnel were deployed to D.C., according to Farr. There was minimal impact on police department staffing, in part because school resource officers and community outreach officers have been added back to the regular patrol staff during the pandemic.

Farr said the overall experience for officers with whom he spoke was “for the most part very positive,” as no Arlington officers were hurt and they were able to utilize their training.

For its part, the Arlington Coalition of Police, in a lengthy statement also released Tuesday evening, criticized the decision to remove officers hastily.

Last night the County Board decided impulsively to order the ACPD contingent out of D.C. We believe the County Board acted rashly, and a number of different constituencies now may pay a price. The officers from other agencies that remain in D.C. amid continued protests are now less numerous and, thus, less safe. Our department now has a stain on its reputation throughout the region because we backed out of a commitment at an incredibly challenging time.

The Arlington Community stands to suffer, as well. Should we ever be in a position where we need help from an adjoining jurisdiction, we are now less likely to receive it. That situation could come in the form of a protest or a riot. It also could come in the form of recovery from a natural disaster or an active shooter. The reality is we never will be able to plan for all of the situations in which we might need help, but it sure would be nice to know other agencies are ready and willing to assist at a moment’s notice should we make the request. That’s why mutual aid agreements exist.

For anyone who is of the opinion that ACPD officers should not be involved in the particular protests going on right now in the District at all, we respect your viewpoint. But please consider that especially right now, everyone is searching for answers. And one solution of the many that are needed is to rely more heavily on police officers that are intelligent, level-headed, compassionate, and fair. ACPD takes great lengths to hire and retain police officers of the highest quality. If there are going to be police officers monitoring a protest and attempting to ensure the safety of all involved parties, ACPD employs the type of officer you would want involved in such an undertaking.

The statement also offers apologizes to George Floyd and his family on behalf of Arlington police officers.

“What happened in Minneapolis on May 25 was murder,” wrote the police association, which also signed on to a similar county-issued statement. “The behavior shown by the involved police officers was callous and inexcusable. It should not have happened. It should never happen. That behavior is not what we stand for, nor what our members represent. We support those Minneapolis police officers being held accountable for their actions.”