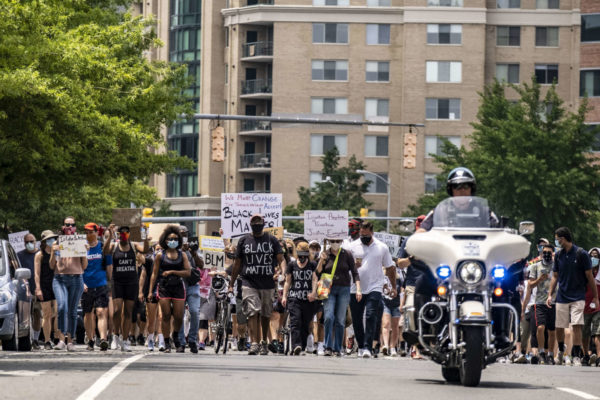 Protests over the death of George Floyd and others killed at the hands of police have sparked a debate: should police budgets be cut and the money re-allocated to social services?

The “defund the police” movement has been a particularly hot topic on social media, where some proponents have shared charts showing police budgets in U.S. cities dwarfing other expenditures, including education. The charts are misleading, though, according to fact checks — while police budgets are indeed significant, they are smaller than expenditures on schools.

In Arlington, the police department budget in the just-passed Fiscal Year 2021 budget, which takes effect on July 1, is $74.7 million. That’s 5.3% of the overall Arlington County government general fund of $1.4 billion. The police budget is one-ninth the size of the $670 million Arlington Public Schools budget passed last month.

By comparison to another locality of note, the ACPD budget — which rose from $72.1 million in the prior fiscal year — is just over a third of the police budget for the city of Minneapolis, where major changes to the police department are being formulated in response to the killing of Floyd by its officers. The city’s population is 429,606, compared to Arlington County’s population of 235,000.

The police department is one of the larger line items in Arlington County’s budget, and is just one component of Arlington’s overall public safety and law enforcement expenditures. It is, however, not the biggest single department in the budget: both the county’s Dept. of Environmental Services and Dept. of Human Services have budgets over $100 million.

Here are a few selected line items from the county budget: