(Updated at 4:35 p.m.) With the nation’s attention turned to police misconduct following the murder of George Floyd and the mass protests that have followed, a recent report details an uptrend in use of force by and complaints against the Arlington County Police Department.

The 2019 Annual Report from ACPD’s Office of Professional Responsibility says that complaints against police personnel rose 55% between 2018 and 2019, after falling for at least three straight years. Reported use of force incidents rose 72% during the same time period.

A majority of the complaints were “internally generated” within the police department. 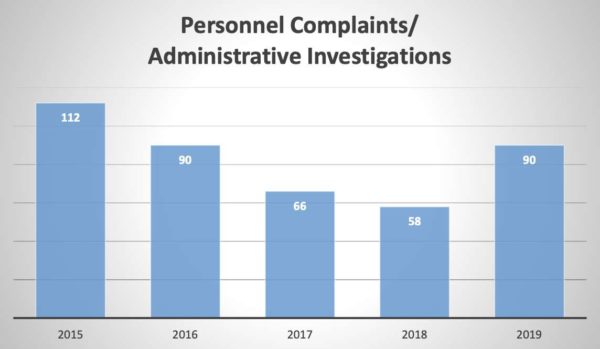 A police spokeswoman acknowledged the increase in complaints in a statement to ARLnow, but said the total was with the “normal range.”

Forty internally-generated complaints, or about 74%, were “sustained” and found to have merit. Only one external complaint, or 3% of those submitted, was sustained.

“There were five (5) allegations of racially-biased policing which were investigated and unfounded,” notes the report.

Most of the sustained complaints involved use of police vehicles, including 36 related to traffic collisions in which police personnel were found to be at fault. Four involved conduct unbecoming an officer.

No officers were fired, but five were suspended between 4-100 hours, the report says.

ACPD investigates thousands of reported crimes over the course of a year, and serves a population of around 235,000.

As of 2018, ACPD had 353 officers, 82% of which were white, 11% black, and 3% Asian. That year, a county-commissioned community survey found that 86% of residents were satisfied or very satisfied with the “overall quality of local police service.” 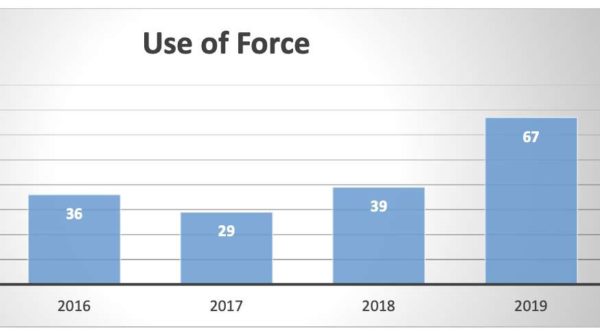 Use of force, meanwhile, increased year-over-year, with 67 documented incidents in 2019, as compared to 39 in 2018 and 29 in 2017. Only one use of force was determined by the department to be outside the scope of police policy.

Clark said that at least some of the increase is attributable to a policy change that went into effect on July 1, which expanded the reporting requirements for use of force.

The 2019 incidents included the following types of force, per ACPD:

More from the report:

A total of one hundred fifty (150) officers were involved in these incidents. Citizens/suspects were injured in forty-eight (48 or 72%) of the incidents in which force was used. Hospital care was necessary for twenty-two (22 or 33%) of those injuries. Twenty-six (26 or 39%) officers were injured during use of force incidents in 2019, with hospital care necessary for eight (8 or 12%) of them. Sixty-six (66 or 99%) use of force reports were determined to be within policy.

(After the internal release of the report in March, a subsequent memo from Police Chief M. Jay Farr detailed the four officer-involved shootings in Arlington over the past decade, all of which were investigated and found to be a justified use of force.)

ACPD has put an emphasis on officer training, including teaching restraint when it comes to the use of force. The department has also tried to maintain positive community relations through meetings and event, like a town hall meeting in 2014 after the fatal police shooting of Michael Brown in Ferguson, Missouri.

During that meeting, some attendees from the historically black neighborhood of Green Valley complained about treatment of black residents by police.

More recently, ACPD held an online meeting last week with a local Black Lives Matters organizer, during which Farr defended the department’s record but said some incremental reforms would be considered. That includes looking at further “tightening up” the language around requiring officers to report incidents of excessive force.

“The Department is committed to remaining engaged and transparent with our community, while holding ourselves accountable to the highest professional standards,” Clark told ARLnow today. “As such, we regularly review and evaluate our policies, procedures and training to ensure they are consistent with best practices in law enforcement and in order to best serve our community.”