Arlington County police are stepping up patrols around Crystal City and surrounding neighborhoods amid a rash of carjackings.

There have been 18 carjackings in Arlington since January 2020, the police department said, compared to three total over from 2018 to 2019. Most — 13 out of 18 — have occurred along the Route 1 corridor, including 7 in the immediate vicinity of the Pentagon City mall. 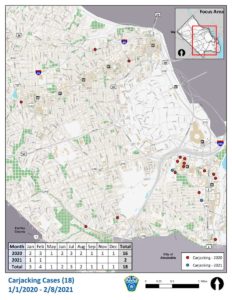 It’s part of a regional crime trend, with other D.C. area jurisdictions similarly experiencing sharp rises in carjackings. ACPD says it has arrested or identified suspects already in custody in 8 of the 18 cases in Arlington.

To help combat the crime wave, the department “continues to deploy increased police resources, to include both visible and non-visible assets, in Crystal City and the surrounding neighborhoods.” It is also “engaging with community members and businesses in the area to share important crime and safety information.”

“The Department is deploying electronic signboards in various locations throughout the County as part of a high-visibility public awareness campaign,” ACPD said in a press release Tuesday.

The carjackers, police say, “often approach victims as they are exiting or sitting in their parked vehicles, brandish a firearm and demand the victim’s keys or property.”

At approximately 4:40 p.m. on February 13, officers working in the area were dispatched to the 900 block of Army Navy Drive for the report of a suspicious unoccupied vehicle. The reporting party advised they had observed four subjects exit the vehicle, walk slowly through the parking lot, appearing to be casing vehicles. Using law enforcement resources, officers determined the vehicle had previously been reported stolen from a carjacking in Maryland. Officers established a perimeter and the occupants were taken into police custody as they returned to the vehicle. [An 18-year-old suspect from Washington, D.C.] was found in possession of the vehicle’s key and was charged with Unauthorized Use of a Vehicle and Contributing to the Delinquency of a Minor. Two other occupants, an adult and juvenile, were charged with narcotics offenses.

Police offered the following safety tips for drivers to help avoid being a victim of a carjacking, car theft, or vehicle break-in.