(Updated 2:45 p.m.) Two Arlington County police officers have been decertified due to a new state law that expands the kinds of offenses for which officers can be permanently banned from law enforcement work in Virginia.

The Arlington County Police Department found the two had lied during an internal affairs investigation. They were officially taken off the streets on May 12, according to the Virginia Department of Criminal Justice Services’ master list of 94 officers who have been decertified since 1999.

No other Arlington officer appears on that list, but the list does not include all the decertifications documented on paper between 1994 — when the Virginia State Crime Commission recommended a decertification process — and 1999, per a DCJS staff member.

Lying is one of two offenses punishable with decertification under the new law, which went into effect on March 1, the Prince William Times reported. These reforms were backed by the Virginia Association of Police Chiefs, which particularly supported a truthfulness clause.

The new law allows DCJS to ban officers from law enforcement work in Virginia if they were found to have lied or used excessive force.

Seven officers have lost their ability to work in Virginia under the new criteria: Six were decertified for making untruthful statements or providing untruthful documentation and one for using excessive force.

“The decertification process is independent of ACPD’s internal investigation and audits process,” said Ashley Savage, the spokeswoman for ACPD. “Accountability is the basis from which we operate and we are committed to holding ourselves accountable to the highest standards of professional law enforcement.”

ACPD notifies DCJS of “sustained allegations which compromise an officer’s credibility, integrity, honesty, and where officers are convicted of a felony or certain misdemeanors, failed a drug test, or did not maintain their training requirements,” she said.

Prior to the new legislation, officers could be decertified for being convicted of a felony or certain misdemeanors, failing a drug test or not maintaining training requirements. Since 1999, the most common reasons for decertification included sex crimes (22), fraud (11), assault (10), refused or failed drug tests (9), larceny (7), and destruction or falsification of records (5). 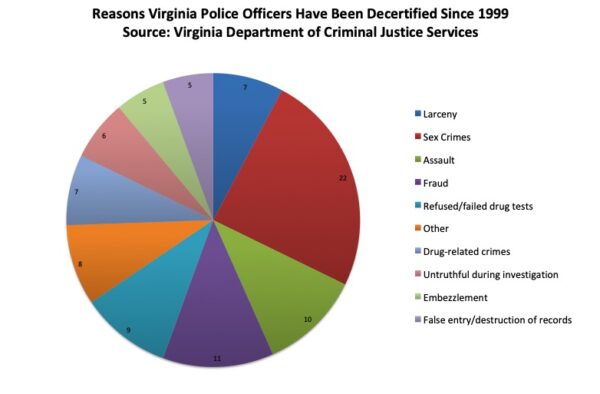 The number of police officers decertified annually in Virginia hovered between five and seven for a number of years, but picked up in 2018 and 2020, the records show. DJCS determined 15 and 19 officers were unfit for duty, respectively, during those years.

Before reaching out to DCJS, ACPD’s Office of Professional Responsibility performs internal audits on all allegations of misconduct and any concerns of use or misuse of equipment, personnel or training, Savage said.

“We constantly monitor and investigate all complaints made against members of the agency,” she said. “When employee actions are not consistent with Arlington County policies and procedures, appropriate corrective measures are taken to ensure that type of incident does not occur in the future; this includes disciplinary action, up to and including termination. Failure to report an incident and/or misconduct by any member of the department is not tolerated.”