The Arlington County Police Department welcomed a new member to the team on July 1.

K-9 Bo, a two-and-a-half-year-old pure-bred Doberman Pinscher, is joining the force to help detect explosives. He will patrol the county alongside his handler, Corporal Williams.

Bo makes a timely addition to the department as the Arlington County police and fire departments work to improve their response to explosives threats.

Bo has spent the last two years training for the job at Penn Vet Working Dog Center, a national research and development center for detection dogs. At the facility, Bo learned odor recognition, search skills and worked on acclimating to an urban environment. He can now detect more than 26 specific odors including explosives and materials used in homemade explosive mixtures, according to ACPD spokeswoman Ashley Savage.

“Doberman Pinschers are known to be loyal, athletic and intelligent, making them a great choice for use in law enforcement work,” said Savage. 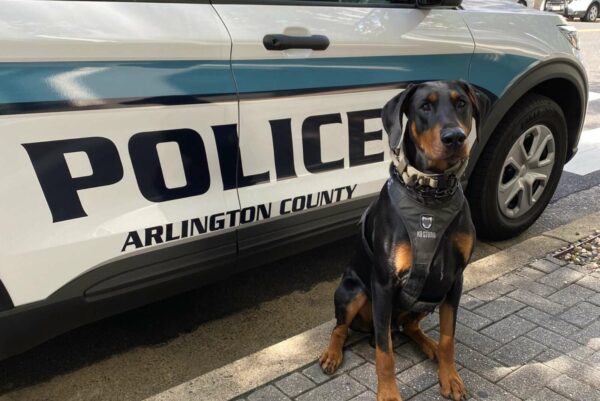 “I am excited to begin working with my new partner and to increase the explosives detection capability of the agency,” said Williams.

Bo’s full name is Sunny Boy. He was named after a search and rescue dog who responded to search efforts at the World Trade Center on Sept. 11, 2001.

Savage said the name is fitting, as the county is always working to carry on the legacy of those who served in New York and Arlington on that day.

“Arlington is committed to honoring those that lost their lives in the terrorist attacks, and expressing gratitude to all those who responded that day,” said Savage.