Protected bike lanes on Fairfax Drive are a project whose time has come.

It’s a critical link that would connect commercial areas, parks, and trails to thousands of Arlington residents. It deserves a place in Arlington’s next 10-year Capital Improvement Plan.

Over the years, we have learned that standard painted bike lanes, like the ones currently on Fairfax Drive, mostly benefit people who are already biking — the confident and fearless cyclists who are already out there on the streets. To making biking work for a wider audience, those who are interested but concerned, we need low-stress facilities like protected bike lanes and trails. 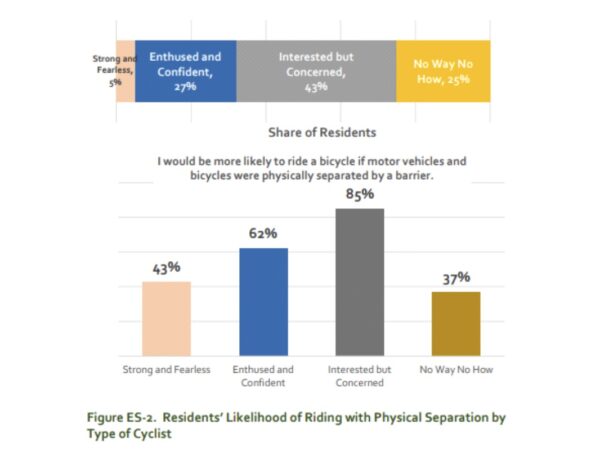 Fairfax Drive forms a critical east-west path through the County, especially for bikes and scooters. On the west end, it connects to both the Custis Trail and the Bluemont Junction Trail. In the east, it connects to Clarendon Circle where the Wilson Blvd and Clarendon Blvd bike lanes begin. In between in connects commercial areas, Metro Stations, parks, Central Library, the George Mason University campus and more.

There are few, if any, nearby parallel streets appropriate for cycling. Neither Washington Blvd nor Wilson Blvd in the vicinity have bike facilities. One can piece together a decent stretch of 9th Street N., but safely crossing Quincy Street without a four-way stop or traffic signal is difficult, it does not connect well on the West end to the trail network and it falls apart on the East end well short of Clarendon Circle.

Finally, adding protected bike lanes to Fairfax Drive is a chance to make a host of design changes that would make the street safer for everyone. As a former VDOT road, Fairfax Drive has been built almost exclusively to speed motor vehicles — safe crossings are far apart, corners were built to allow high speed turns across crosswalks, lanes are wide and encourage speeding. This section of Fairfax Drive is not just on Arlington’s High Injury Network, it’s #2 in fatal and serious injury crashes per mile in Arlington County.

Protected bike lane setups vary — often they look like normal bike lanes, one lane on each side of the street, but with something between moving cars and bikes to provide protection. Sometimes it’s parked cars (and a buffer to prevent car doors from infringing on the bike lane), sometimes it’s curbs or crash-rated planters. Much of the Quincy Street protected bike lane is like this — with parked cars protecting cyclists and a painted buffer with plastic bollards providing space for passenger doors to swing.

Other times, both directions of bike travel are accommodated on the same side of the street — a two-way protected bike lane. This setup saves space — only a single buffer is needed, rather than the two separate buffers needed in a traditional setup — but can make signal timing tricky; left turns must have a green arrow to safely cross the two-way facility.

Matching this configuration would make the connection on the west end quick, easy and obvious.

Secondly, on the far east end, in order to connect to Clarendon Circle, the facility needs to “turn” onto the small spur of Fairfax Drive behind Northside Social. For a two-way facility on the north side, this isn’t a “turn” at all, but a straightforward movement. For a traditional pair of one-way Protected Bike Lanes, accommodating this movement for eastbound cyclists would be trickier and more difficult to navigate (but doable, if necessary).

Fairfax Drive is about 83′ wide for the vast majority of its length – more consistent than most streets in Arlington. There are a couple of narrower spots and as a result those narrower blocks generally don’t have street parking on at least one side — the block between Quincy and Pollard is a good example. A typical cross-section like the one sketched below is achievable within an 83′ curb-to-curb width allowing existing infrastructure behind the curb (existing sidewalks and street trees, for example) to stay in place while retaining essentially all parking and motor vehicle capacity.

For the project to move forward, it will need to appear in Arlington’s next 10-year Capital Improvement Plan. Arlington will adopt that plan next Spring and planning for it is already beginning. The County Board and County staff need to hear that this project is a priority for Arlington residents. If you would like to see a safer, lower-stress Fairfax Drive, you can email the County Board directly or use Sustainable Mobility for Arlington County’s handy action alert tool.