Four years ago, we asked why a stick of deodorant was on top of a Clarendon bus stop.

Today, a new mystery: why is there a cheap plastic chair resting in a treetop in a Rosslyn park? A reader sent us the photos above, showing the chair lodged in some tree branches well above a pedestrian pathway.

“There is a plastic garden chair stuck in a tree about 40 feet off the ground at Hillside Park in Rosslyn,” writes John Thomas. “It might make an interesting story to speculate how it got there. Tornado? Cicadas?”

Trebuchet testing and aircraft door mishap are perhaps some other options that could explain it.

With the caveat that we have yet to contact Arlington’s Dept. of Parks and Recreation or the National Weather Service for official comment about what happened, the tornado hypothesis might actually make some sense.

On July 1, an honest-to-goodness EF-1 tornado touched down in Arlington, doing most of its damage in the Waverly Hills, Cherrydale and Lyon Village neighborhoods, before crossing the Potomac and snapping trees on the west end of the National Mall. The damage path finally ended near the South Lawn of the White House.

Between Lyon Village and the Mall, however, the path of the tornado did take it over Rosslyn and… Hillside Park, which is located at 1601 N. Pierce Street. 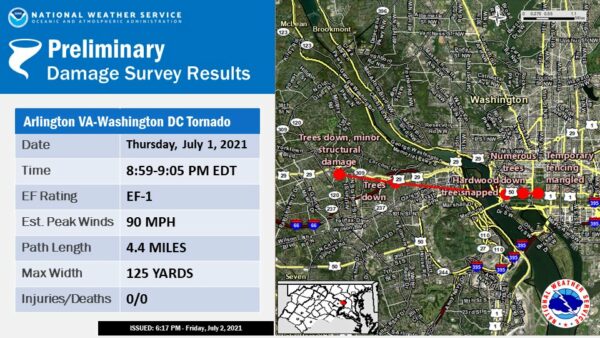 To better illustrate, here’s a line drawn between Woodstock Park in Arlington, where the tornado damage started, and where it ended. The pin in the center shows Hillside Park. 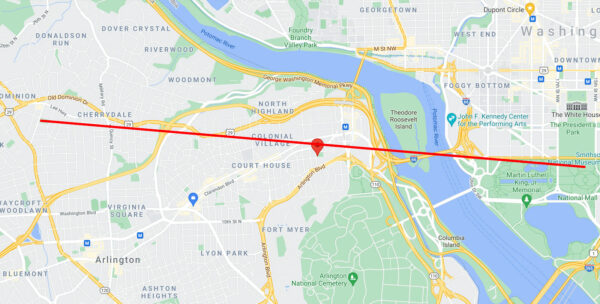 So unlike the deodorant mystery, which to this day remains unsolved (though a local bar employee’s comment that “people get drunk on the weekends, that would be my best guess,” seems as plausible as anything) it appears that the twister take is a definite maybe for Arlington’s latest head scratcher.

Have any alternative theories? Anything to disprove the tornado hypothesis? Let us know in the comments.