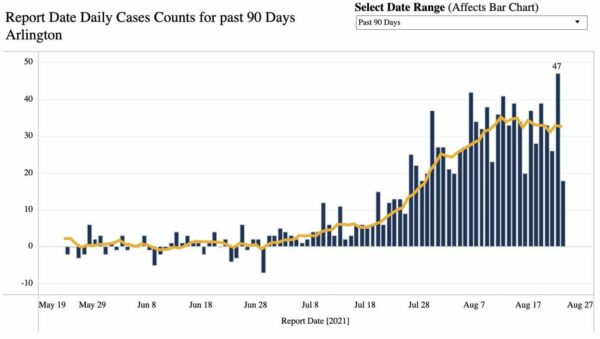 (Updated at 4:05 p.m.) Arlington’s average rate of new daily Covid cases has plateaued over the past two weeks.

The seven-day moving average currently stands at about 32-33 daily cases. It’s remained around that level, give or take two cases per day, since Aug. 9. The plateau followed a month-long rise in cases since the beginning of July, fueled by the more contagious Delta variant.

One new death and only one new Covid-related hospitalization have been reported over the past week, since Aug. 16.

Though the case average has held fairly steady, the 47 new cases reported on Sunday, according to Virginia Dept. of Health data, represent the highest one-day total since 57 cases were reported on April 9.

With reports of break-through cases among the vaccinated becoming more common, Arlington County last week started offering third doses of the Pfizer and Moderna to certain immunocompromised individuals. The county expects to offer booster shots to the general public later next month, as proposed by the Biden administration.

The Food and Drug Administration, meanwhile, announced today that it has granted full approval to the Pfizer vaccine. It was previously offered under an Emergency Use Authorization from the FDA.

With the full approval, the Dept. of Defense says it is planning to make vaccinations mandatory for U.S. service members.

Though it’s hard to predict what will happen with Arlington’s Covid case rate, there is some cause for optimism. In Florida, hard hit by the Delta wave, cases appear to be peaking or falling in many parts of the state.

“FL cases peaking, even as FL students return to school ..” – @fundstrat, who has been early on this. pic.twitter.com/nBaZvmE3xO