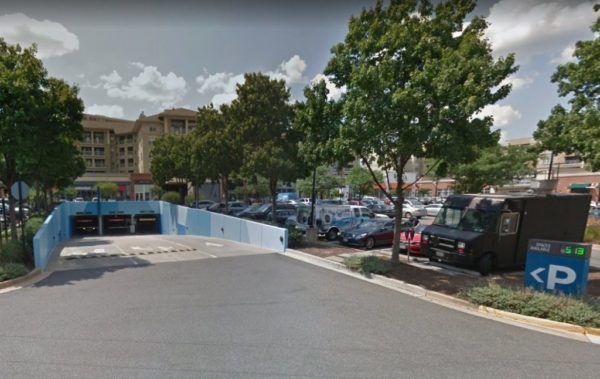 Five people were arrested after an armed robbery outside the Harris Teeter store in Pentagon City.

The robbery happened around 4 p.m. Wednesday, in a parking lot near the grocery store. Five people, including at least one who was armed with a handgun, assaulted and stole cash from victims with whom they had arranged a sale of sneakers, according to police.

“At approximately 4:11 p.m., police were dispatched to the 900 block of Army Navy Drive for the report of an armed robbery,” Arlington County Police Department spokeswoman Ashley Savage tells ARLnow. “Upon arrival, it was determined that the suspects and victims met at this location for the pre-arranged sale of sneakers. During the encounter, the suspects brandished a firearm, assaulted the victims, stole an undisclosed amount of cash and fled the scene in a vehicle prior to the arrival of officers.”

The vehicle, a dark-colored Jeep, was soon located by police heading into D.C. on I-395. It was followed by officers until U.S. Park Police stopped the vehicle at the intersection of Pennsylvania Avenue and 9th Street NW in the District.

Five people, all ages 19 and 20, were taken into custody and charged with robbery and conspiracy to commit robbery, Savage said. They’re currently being held in D.C.

One of the victims suffered a reported head wound during the robbery and was treated by medics on the scene.

END_OF_DOCUMENT_TOKEN_TO_BE_REPLACED

More Stories
RĀKO Coffee, Cocktail and Wine Bar Opens in Courthouse This WeekendBoring Title: 4 Tips to Help You Get Top Dollar for Your Listing (Video)