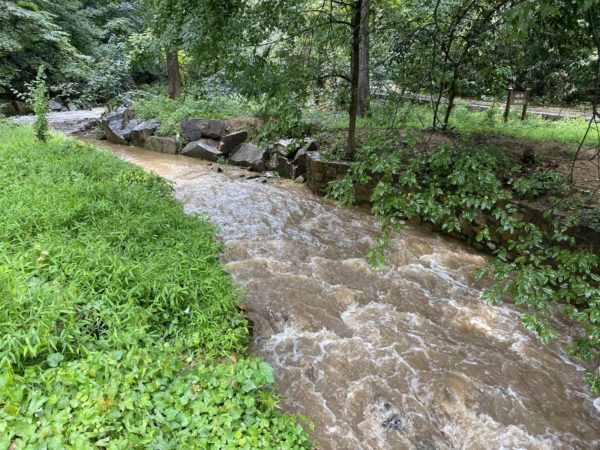 So far Arlington has dodged the worst of Hurricane Ida’s remnants this afternoon, but the storm system is still having some local impacts.

With a Flash Flood Watch and a Tornado Watch still in effect, Arlington Public Schools cancelled all afternoon and evening activities on school grounds.

All activities scheduled in Arlington Public Schools or on school grounds for this afternoon and evening are canceled, due to inclement weather, including extracurricular activities, athletics, team practices, adult education classes, field trips, after-school programs, and other school-based activities. The afternoon Extended Day Program will remain open until 6 p.m.  Extended Day requests families pick up students as early as possible. We will continue to monitor the weather and provide updates as necessary.

ALERT: Parks and Recreation will be closing centers & cancelling activities beginning at 4 p.m. on Wed., Sept. 1 due to the impending storm.#arlingtonva

Arlington is within an area identified as a tornado risk, but the heavy storm activity has been mostly concentrated in Maryland near the bay. A tornado ripped through Annapolis and nearby communities within the past hour, causing damage.

SPC showing that DC Metro and points east have the greatest threat for tornadoes over the next few hours. pic.twitter.com/iZgfpx8gXp

Arlington has seen heavy rain this afternoon, which — after the downpours that accompanied a severe storm overnight — has caused some local streams to swell. No major flooding has been reported in the county.

On-and-off rain showers are expected to continue into the evening, before ending by early morning Thursday. Additional storms are also possible around dinnertime.

Models have maybe one final round worth watching between about 5-8pm for tornado risks but things should steadily become calmer through the evening hours with lighter rains ending around midnight. Hang in there folks!! We’re making it. Stay safe ⛈ pic.twitter.com/CGIfZprmDs