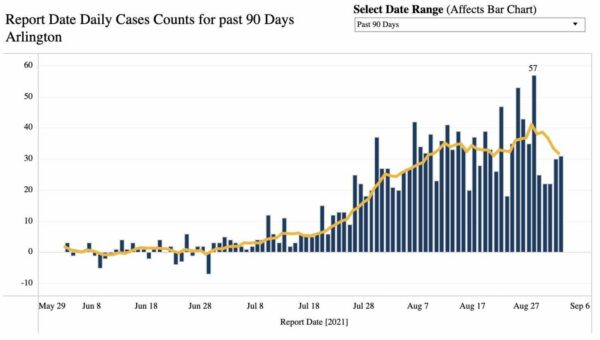 (Updated at 1:25 p.m.) The start of the extended Labor Day weekend is a day away and there’s a bit of good news beyond the nice weather: there’s been a slight dip in coronavirus cases.

After a mid-August plateau, the seven-day moving average of new cases in Arlington started moving upward again, peaking at 41 cases per day this past Saturday, Aug. 28. That’s now down to about 32 cases per day, according to Virginia Dept. of Health data.

The rates of both Covid tests administered (1,134 to 1,051 daily tests per day) and test positivity (4% to 3.5%) have also dipped during that approximate time period, suggesting that while people being out of town due to pre-Labor Day vacations may partially explain the dip in cases, it’s not the entire explanation.

(As pointed out by a reader, the timing of the dip may also correlate to college students returning to campus.)

Hospitalizations and deaths in Arlington attributed to Covid are still being reported, though at a lower level compared to earlier in the pandemic. A dozen hospitalizations and two deaths have been recorded over the past month, according to VDH.

Arlington’s high (and slowly rising) vaccination rate — nearly 73% of the adult population has received at least one dose — is likely a major contributor to the relatively low incidence of serious illness and death.

There’s some talk of the current delta-variant-fueled Covid wave peaking on a national level, though the jury is still out as to what the next few months will hold. That’s especially true given the emergence of a new viral variant dubbed “mu” that’s said to have a greater ability to evade immunity from vaccines or prior infections.

Read more →
More Stories
Morning Poll: Nice Weather Is Here, How Happy Are You About It?Cowboy Café’s Legendary Brunch Now Available Every Morning of the Week