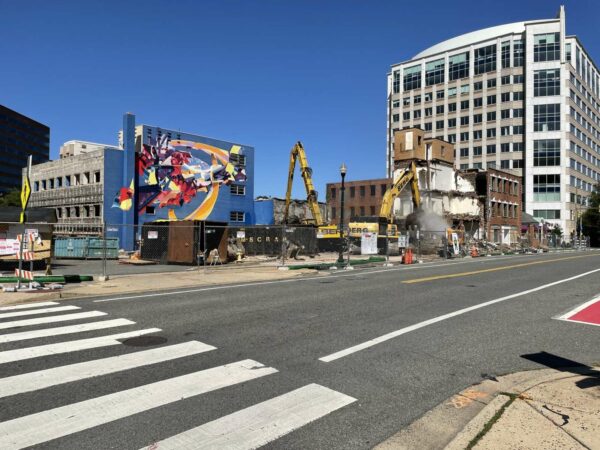 Firefighters Recount 9/11 Horror — “Arlington County firefighter Matthew Herrera was racing to a call for an apartment fire in Rosslyn, Virginia, 20 years ago, when his crew was rerouted. Their new destination: the Pentagon, for a report of a plane down in the area. It was Sept. 11, 2001. Herrera, now a captain, struggled to get through piles of debris inside the building, right where the plane had hit, to fight the blaze. ‘The first time I fell, I got up real quick and I remember (thinking), ‘I hope I’m not stepping on somebody.’ And I knew that I probably was,’ Herrera told WTOP.” [WTOP]

More Recollections of Sept. 11 — “What they encountered was catastrophic, unprecedented and unforgettable. ‘There was just one piece of the plane I could see,’ recalls Scott, who today holds the rank of Captain II with Arlington Fire/EMS. ‘It was the letter C, from American Airlines.’ Along with countless other responders, Scott spent hours working to suppress the fire raging on the Pentagon’s west side.” [Arlington Magazine, WJLA, NBC 4]

First Hurricane Dog Adopted at AWLA — From the Animal Welfare League of Arlington: “Over the weekend, the first of our Louisiana dogs was adopted! We think Milo is very happy with his new family . More of the dogs from Louisiana will be available in the coming days/weeks so keep an eye on our website!” [Twitter]

Yorktown Football Undefeated So Far — “When it come to his team’s execution on offense, Bruce Hanson is hard to please. The longtime head coach of the Yorktown Patriots has a 2-0 football team already this fall that has scored 19 and 43 points in each of those high-school contests. Yet Hanson isn’t satisfied with what he says is sloppy and uneven performances, including during Yorktown’s 43-17 blowout of visiting Wilson on Sept. 2.” [Sun Gazette]

A Capital Problem Along Route 50 — “@VaDOTNOVA: Please fix the capitalization error on this sign. Should read ’14th Street,’ not ’14Th Street.’ Has annoyed me for years. On WB Arlington Blvd (US 50) near the Marine Corps Memorial.” [Twitter]

In this month’s Now Hiring, LEGO, Good Company Doughnuts & Cafe and the U.S. Postal Service all have open positions.

Coming up on Saturday, Sept. 25 is the DC Bike Ride, a chance to cruise down 20 miles of D.C. streets with no traffic. Registration closes soon.

(Updated at 5 p.m.) A rescue operation is underway after reports of a worker dangling from scaffolding in Rosslyn. The incident is happening at an office building near the Safeway…