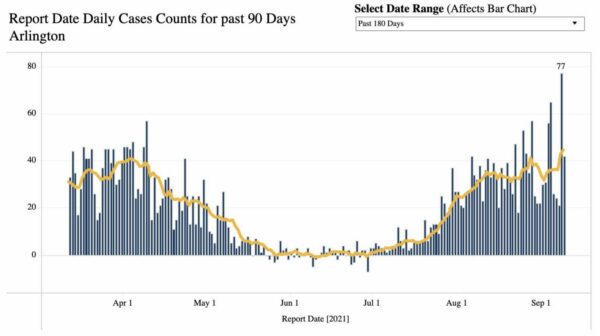 As of this morning the county is seeing just over 44 cases per day, based on a seven-day moving average. That’s the highest point since mid-February.

Though likely inflated due to the Labor Day holiday, 77 cases were reported on Wednesday alone, the highest one-day total since early February.

Reports of Covid-related serious illness remain at a relatively low level: three hospitalizations and one death over the past week, according to the Virginia Dept. of Health.

Amid a continued rise in cases, but relatively low incidence of serious illness among those who are vaccinated, President Biden today is set to announce a stricter vaccine requirement for federal workers and contractors. From CNN:

President Joe Biden on Thursday will impose more stringent vaccine rules on federal workers, and take steps to encourage private businesses to do the same, during a major speech meant to lay out a new approach to combating the coronavirus.

Among the steps the President will take is signing an executive order requiring all federal workers be vaccinated against Covid-19, with no option of being regularly tested to opt out of the requirement, according to a source familiar with the plans.

The President will also sign an executive order directing the same standard be extended to employees of contractors who do business with the federal government.

In Arlington, 73.1% of the adult population has received at least one vaccine dose. That number, which excludes doses administered directly by the federal government, continues to slowly rise over time.