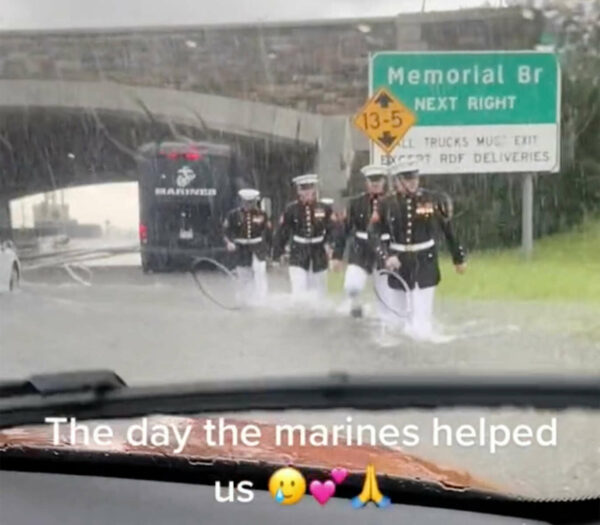 A group of Marines in their dress blue uniforms braved floodwaters along Columbia Pike to help a stranded motorist.

Video of the rescue has gone viral on TikTok, racking up more than 800,000 views as of this article’s publication. It appears to have taken place on Columbia Pike near the Pentagon on Thursday, amid a torrential downpour that flooded a number of roadways around Arlington.

The Marines, in their formal white pants and blue jackets, are seen getting out of a Marine Corps bus that’s stopped on the side of Columbia Pike, under a bridge carrying traffic on Washington Blvd. High standing water can be seen around the driver’s car.

“The Marines are going to help us?” she’s heard asking. “We just got stuck.”

The group trudges through the floodwaters and then is seen pushing the car to safety.

“Oh my God, this is the most American thing ever,” the driver says. “Thank you so much!”

In the comments on TikTok, the driver further expressed her gratitude.

“As an immigrant we don’t usually see these thing in the country I grew up in,” she wrote. “I am so grateful for the country and its Marines and military.”

It’s all in a day’s work for members of the Corps, said others in the comments.

“I am going to tell you right now, they LOVED helping you out,” one man wrote. “Cause this is what we Marines do.”