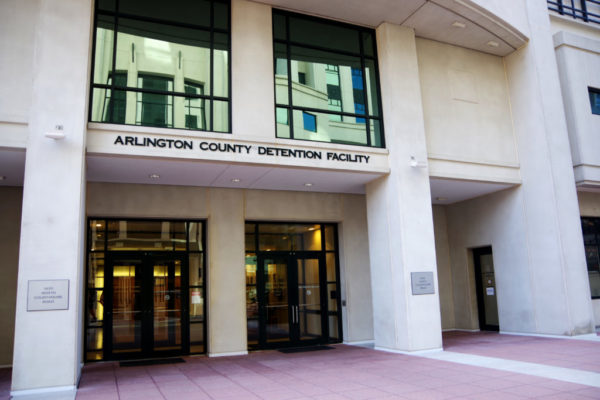 (Update at 5:20 p.m.) A man being held at the Arlington County jail has died after being found unconscious yesterday morning.

Clyde Spencer, 58, was in the jail’s medical unit when he was found unresponsive around 6:30 a.m. Tuesday, according to a police department press release. He was rushed to Virginia Hospital Center following resuscitation efforts, but died last night. An exact cause of death was not given.

The Arlington County Sheriff’s Office, which runs the lockup at 1435 N. Courthouse Road, said yesterday afternoon that the man was “in stable condition.” Today’s police department press release says Spencer’s condition “did not improve, and he was pronounced deceased at 5:58 p.m.”

The in-custody death will now be investigated by the recently-established Northern Virginia Critical Incident Response Team, according to the police department, which described the case as “an active criminal investigation.”

Spencer was jailed for trespassing, the press release noted.

The Arlington branch of the NAACP said in a statement today that this was the sixth death of an inmate in the past six years.

“This is unacceptable, unconscionable, and distressing,” the NAACP said. The full statement is below.

Over a year ago, on October 1, 2020, Daryl Becton died in the custody of the Arlington County Sheriff. In August of 2021, eleven months later, the ACPD said they were putting the final touches on their investigation and would have it to the Commonwealth Attorney “very soon.” Unfortunately, as of October 6, 2021, we have not received any updates that ACPD has sent their investigation to the Commonwealth Attorney over a year later. So now another Black man has died in the custody of the Sheriff at the Arlington County Detention Facility. While we don’t know the details yet and are getting contradictory information from official and unofficial sources, this is the SIXTH death of an Arlington County inmate in 6 years.

Delayed answers for Mr. Becton’s family and now another death. This is unacceptable, unconscionable, and distressing to anyone following the deaths of inmates and our criminal justice system in Arlington, Virginia. We need closure to the investigation surrounding Mr. Becton’s untimely death, and ACPD must recuse itself from investigating this new death. Our community deserves an investigation by an impartial party to get to the bottom of death number 6, another person of color, and a fellow human being.

The last publicly-reported inmate death was that of 46-year-old Darryl Becton in October 2020, the investigation into which remains in progress. Of the four others who died, three were also Black and one was white, according to a joint letter from Arlington Sheriff Beth Arthur and Police Chief Andy Penn to the NAACP, shared with ARLnow.

Two of the men were found to have died of “natural causes” and one died of a drug overdose, the letter said. Jitesh Patel, the deceased inmate described as white, was a murder suspect who committed suicide in his cell with a jail-issued razor, the letter said.

The Critical Incident Response Team, established earlier this year “to investigate critical incidents involving law enforcement officers within the cooperating jurisdictions,” is investigating the latest inmate death at the request of Chief Penn, according to the ACPD press release.

The Northern Virginia Critical Incident Response Team (CIRT) is investigating an in-custody death at the Arlington County Detention Facility. CIRT is a multi-jurisdictional team designed to provide efficient, effective, and standardized investigations in critical incidents such as in-custody deaths. Chief Penn requested CIRT to investigate this incident in the interest of promoting transparency and public confidence.

At approximately 6:30 a.m. on October 5, 58-year-old Clyde Spencer was found unconscious in the medical unit within the Arlington County Detention Facility. Arlington County Sheriff’s Office deputies and medical staff began immediate resuscitation efforts until the arrival of Arlington County Fire Department medics. He was transported to Virginia Hospital Center where he received medical treatment. His condition did not improve, and he was pronounced deceased at 5:58 p.m.

Mr. Spencer had been charged with Trespassing on October 2, 2021 and was being held in the Arlington County Detention Facility.

An autopsy was conducted by the Office of the Chief Medical Examiner to determine cause of death. This remains an active criminal investigation and anyone with information related to this incident is asked to contact [email protected] Information may also be provided anonymously through the Arlington County Crime Solvers hotline at 1-866-411-TIPS (8477).

END_OF_DOCUMENT_TOKEN_TO_BE_REPLACED

More Stories
Peter’s Take: Environmental Policy Implementation Should Be Based on the Best DataMost Expensive Arlington Homes Sold in September