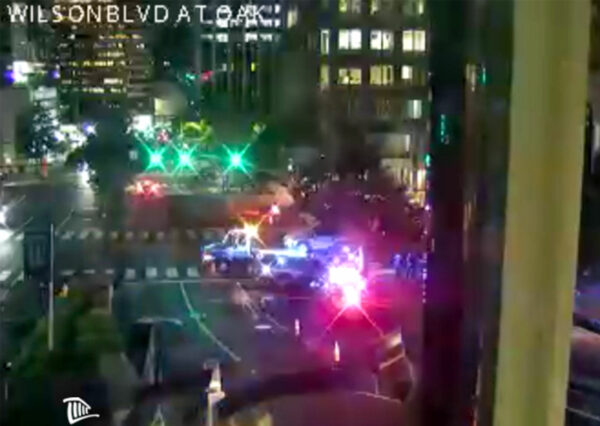 (Updated at 9:30 p.m.) A person suffered serious injuries in what’s being described by police as a single-vehicle crash in Rosslyn.

The incident happened around 6:30 p.m. at the intersection of Wilson Blvd and N. Oak Street, near the Target store. Traffic camera footage posted on Twitter, below, shows medics attending to the injured person on the sidewalk.

We’re told that the incident was initially described to first responders as a parked vehicle that rolled backward and struck a woman, possibly its driver, and caused a serious leg injury. Those details could not be immediately confirmed, though police did describe the victim as the vehicle’s driver.

ACPD is investigating a single-vehicle crash with injuries at Wilson Boulevard and N. Oak Street. The driver is being transported to an area hospital with serious injuries. Police remain on scene investigating. https://t.co/a9J2gghnwz

With CarCare To Go receive free valet pick-up and delivery when having your car serviced for maintenance, repair, detailing and more this holiday season.

(Updated 4:40 p.m.) County commissioners welcome Amazon’s latest revisions to plans for the second phase of its HQ2 in Pentagon City — but are pushing for more greenery and accessibility….

Community Matters is a biweekly opinion column. The views expressed are solely the author’s. My father and I recently visited Bridgeport, Alabama, a small town located in Northeast Alabama near…

The self-proclaimed “world’s first decentralized pizzeria” is now serving up pies in Courthouse Bitcoin Pizza, a “virtual restaurant,” opened on Oct. 31 and operates out of the kitchen of Fire…