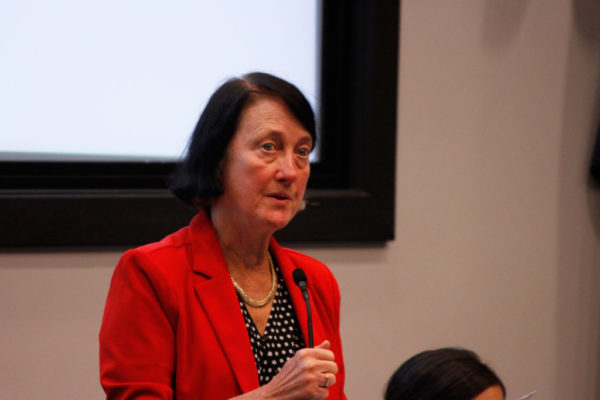 Last week, we invited the four candidates running in the general election for a seat on the County Board to write a post about why our readers should vote for them next Tuesday (Nov. 2).

Here is the unedited response from Audrey Clement:

I’m Audrey Clement, Ph.D., Independent candidate for Arlington County Board. As a 17-year Westover resident, long time civic activist, and former member of the Transportation Commission, I’m running for County Board because it has pushed harmful policies resulting in:

The pandemic has challenged residents’ ability to make ends meet, with many businesses shuttered and people out of work or facing eviction. In response other Northern Virginia jurisdictions reduced their tax rates earlier this year. Not so Arlington County Board, which adopted a tax package that together with rising assessments increased the effective real estate tax rate by 6 percent. (See FY 2022 Adopted Budget, Revenue Summary, p. 114)

Another Board priority that I oppose is its push for so-called “missing middle” housing–multi-family dwellings in single family home neighborhoods. Contrary to what the County says, “missing middle” is a euphemism for up-zoning that will not make housing more affordable. Instead, it will inflate land values, resulting in higher housing prices, overcrowded schools, more traffic congestion, loss of tree canopy, increased runoff and more air pollution.

The County under my opponent’s leadership has packaged up-zoning as the solution to racial inequality despite the fact that few minorities will qualify for mortgages on up-zoned lots.

Finally, while I agree with the police reforms recently adopted by the General Assembly, I oppose symbolic gestures. The fact that Lee Highway has a new name and the County has a new logo, means nothing to people of color facing inferior employment, housing or educational opportunities.

Changing the name of W&L High School in 2019 did not close the minority student achievement gap. In fact, it helped hide the dirty little secret that the County was investigated by the Justice Department in 2018 for discriminating against English language learners.

The inequitable policies pushed by Arlington County government are the direct result of the fact that it has been controlled by the same political party for decades. Some have criticized the fact that I’m a repeat candidate for public office. I’m proud of my record of challenging the political machine that runs this County, and I solicit your support in defeating it.

If elected, I pledge to:

END_OF_DOCUMENT_TOKEN_TO_BE_REPLACED

More Stories
JUST IN: Kid on bike struck on Langston Blvd by driver who then fled sceneTakis Karantonis: Why you should vote for me for Arlington County Board