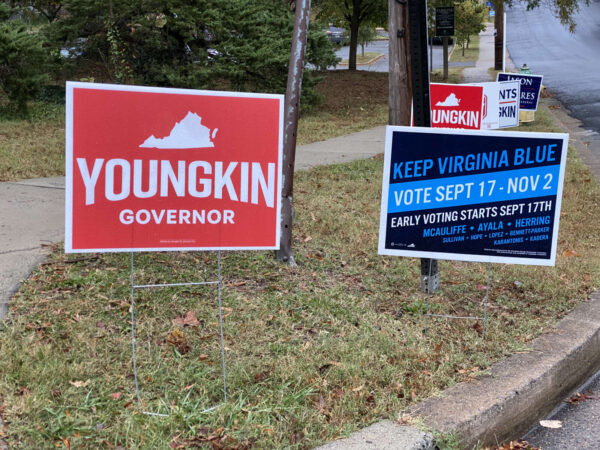 (Updated at 1 a.m.) The eyes of the nation are on the statewide races in Virginia tonight — and, at least occasionally, on Arlington, which is remaining deep blue.

Another Election Day has resulted in another decisive sweep for Arlington Democrats in the local races.

The narrowest win, relatively speaking, belongs to County Board member Takis Karantonis, who currently has just over 60% of the vote with all but two of Arlington’s 57 precincts reporting. His three independent challengers — Mike Cantwell, Audrey Clement and Adam Theo — have about 14%, 18% and 6% of the vote, respectively.

Democratic-endorsed School Board candidate Mary Kadera is cruising to victory and will replace fellow Democrat Monique O’Grady, who did not seek another term. In the House of Delegates races for districts that include Arlington, Alexandria Vice Mayor Elizabeth Parker-Bennett will be headed to Richmond in January, while Dels. Patrick Hope, Alfonso Lopez and Rip Sullivan were all reelected.

All four of the county’s 2021 bond referenda will pass, with the $17 million “community infrastructure” bond receiving 71% yes votes, the lowest of the four.

More than half of Arlington registered voters cast ballots — 26.5% did so through early voting — though whether the turnout exceeds the 59% seen in the 2017 gubernatorial race will not be official until all of the votes are counted. The Arlington elections office said that it would not be able to complete the count until later this week due to outstanding ballots.

Signing off for the night. All precincts, early voting, & mail ballots received through tonight are reported.

As for the statewide races, 76.5% of Arlington voters voted for Democrat Terry McAuliffe to return for a non-consecutive term in the governor’s mansion, as of 11 p.m. That’s down from the 80% that Gov. Ralph Northam received in 2017, and it will likely not be enough. Republican Glenn Youngkin currently has about 51% of the vote across the Commonwealth, to 49% for McAuliffe.

CNN briefly highlighted the vote in Arlington as its national prime time coverage focuses on the closely-watched race in Virginia, a state that had been trending bluer during the Trump era. 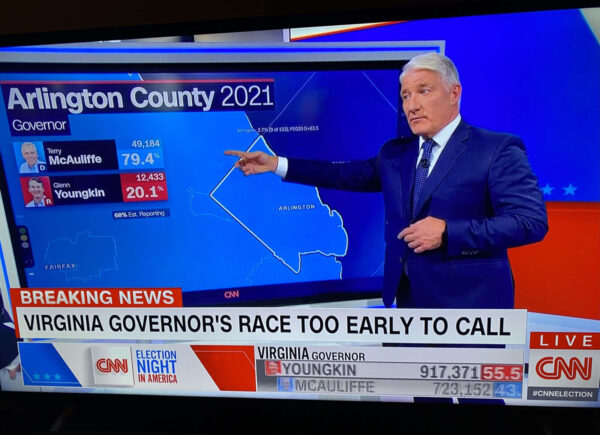 END_OF_DOCUMENT_TOKEN_TO_BE_REPLACED

More Stories
JUST IN: A rabid raccoon was on the loose at the Shirlington Dog ParkJust Reduced Properties in Arlington