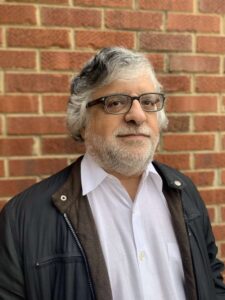 Progressive Voice is a biweekly opinion column. The views expressed are solely the author’s.

The new Arlington County logo seems to announce that we are nothing but an appendage of D.C. Is that a sad admission of the truth, or the declaration of a rather uninspiring ambition? Either way, it’s a gross underestimation of what our county of nearly 240,000 could be.

Arlington enjoys a solid tax base, a geographic and population size conducive to the creation of community, and a diverse, well-educated — and generally liberal-minded — population. So, why are we so timid in exploring ways to use these assets to create a model progressive community, a place where new ideas are tested and refined, where we do more than wring our hands over problems like systemic inequality? In short, why aren’t we more bold?

Arlington has been bold in the past: Over 50 years ago, Arlington’s elected leaders insisted that the Metro be built underground, not above ground as originally planned. While this decision cost billions more, it allowed Arlington’s Rosslyn – Ballston corridor to develop as a compact urban community; the increased tax base must certainly have more than made up for the higher construction costs.

Contrast that decision with the issue of mass transit along Columbia Pike. The best solution would be bus rapid transit (BRT). But to be truly rapid, BRT needs dedicated bus-only lanes. That, however, would require removing street parking along Columbia Pike, which some would oppose. But being bold sometimes requires making decisions that meet resistance. Being bold requires a vision — in this case, the vision of a community dedicated to the reduction of vehicular traffic.

Addressing the “missing middle” housing crisis also requires boldness. Revised zoning laws to allow more small multi-family buildings and duplexes would make it possible for more people and families to live in Arlington’s neighborhoods while maintaining a neighborhood feel. Cities like Somerville, Massachusetts, maintain a neighborhood feel even though much of the housing stock is multi-family. Would this make everyone happy? Of course not. Being bold seldom makes everyone happy, especially when the bold actions are aimed at addressing inequalities or better sharing a community’s resources.

Bold ideas can be borrowed. For example, a way to provide lower-income Arlingtonians with more educational opportunities could be based on the “Birmingham Promise,” a public-private partnership in Birmingham, Alabama — which has a far lower tax-base than Arlington — that provides tuition assistance for graduates of Birmingham City Schools who attend public colleges in Alabama, and offers an internship and apprenticeship program where high school seniors gain work experience while earning money and academic credit.

Other ideas — such as community land trusts (CLTs) and participatory budgeting — have been successfully implemented in a number of communities. CLTs are publicly funded non-profits that purchase and hold property in trust in order to guarantee affordable rental rates. Participatory budgeting (PB), an idea that originated in Porto Alegre, Brazil — allows community members to decide how to spend a designated portion of the public budget. PB goes beyond Arlington’s Neighborhood Conservation Program by allowing community members to identify a wide range of community needs and allocating public budget funds to address them.

Not all bold ideas are realistic or cost-effective. But to find the ones that turn out to be real gems, we must be nimble-minded and willing to take a few calculated chances. If Arlington’s leaders — both elected officials and unelected community leaders — become so risk-averse, so afraid to arouse opposition, so scared of pushing the idea envelope, then we will be in danger of becoming what our new logo portrays: The missing corner of DC, a metro-area afterthought living in our just-good-enough community.

I would like to see Arlington become an urban “beta community,” where we test bold ideas even if they’re in the start-up phase.  Let’s take advantage of our citizens’ innovative ideas and other resources — to see how successful we can become in creating a model 21st century urban community.

William Mark Habeeb first moved to Arlington in 1977 as a graduate student, and he and his wife bought their Arlington home in 1991. Their son attended Arlington Public Schools. Mark teaches in Georgetown University’s School of Foreign Service.

END_OF_DOCUMENT_TOKEN_TO_BE_REPLACED

More Stories
Pines of Florence is coming back, opening in Cherrydale as soon as this weekendAt Phoenix Bikes, learning how to fix a bike is a life lesson