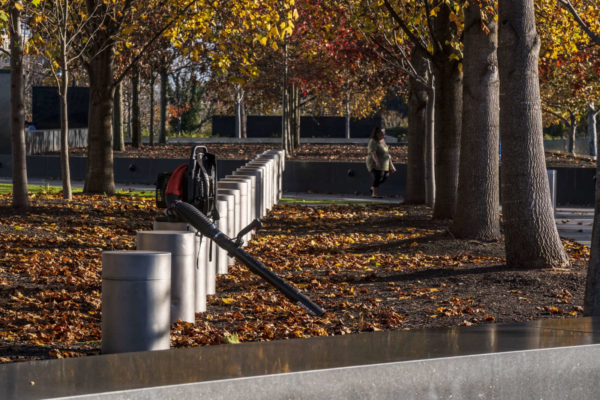 An opinion column railing against gas-powered leaf blowers apparently struck a nerve: it is now ARLnow’s most-read article of the year.

Opponents of the blowers have two primary complaints: the noise and the fumes.

The region is waking up to these noxious machines. The Arlington County Board took an important step on Tuesday, Nov. 16, when it appropriated funds from the American Rescue Plan Act to replace gas-powered landscape equipment with other options.

Leaf blowers are a drain on quality of life. Their piercing noise shatters concentration or the enjoyment of the outdoors. They spew noxious gas into the air. They can destroy insect habitats. But as a collective, we have come to expect leaf-free surfaces wherever we go. The pressure to maintain this appearance means that leaf blowers are ubiquitous.

But a movement against it is underway. I was visiting the Courthouse farmers market a few weeks ago and saw a table from Quiet Clean NOVA, a group petitioning the Virginia legislature for the local authority to regulate gas-powered yard equipment.

Across the river, D.C. is poised to ban gas-powered blowers after ringing in the new year.

… as the D.C. government gets ready to implement a ban on the use or sale of gas-powered leaf blowers at the start of 2022, this will be the final fall that the particular noise and fumes from the equipment will exist without the potential for a $500 fine. The city just introduced a rebate program to help people switch from gas-powered blowers to electric alternatives.

“Ten years from now, people will marvel that these things were ever used,” says James Fallows, a longtime D.C. resident who helped advocate for the ban. He has also written about his efforts in The Atlantic.

But gas-powered blowers also have their supporters. Many of those commenting on Green’s column were landscape workers — those hired by homeowners to clear leaves from their yards. The suggestion that other ways of clearing leaves can be just as effective doesn’t take into account the real-world experience of such workers, they wrote.

Even electric blowers, a potential option should the fossil fuel-powered versions be verboten, are not practical for many landscaping crews, some wrote.

What do you think? Should the Virginia legislature give Arlington the ability to ban gas-powered blowers, should the county do so?