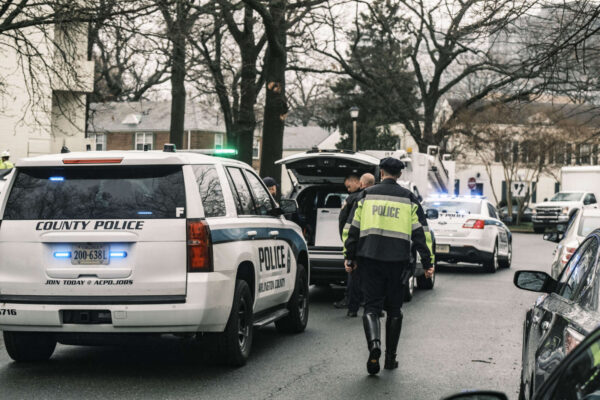 (Updated at 9:55 a.m.) Arlington County police say they will reduce some services as the department faces staffing challenges.

ACPD is grappling with the impacts of attrition from the department, retirements and officers leaving the force for other jobs, including private-sector security jobs at Amazon’s second headquarters.

According to the department, these staffing struggles mirror national trends.

Police Chief Andy Penn said in a video message released yesterday (Tuesday) that the department has 290 “functional” police officers — those who are able to respond independently to calls for service. Another 40 officers are in training or on light-duty status, while 46 positions are unfilled.

In 2019 and 2020, ACPD had between 313 and 334 functional officers. The current figure, 290, has not changed since ARLnow reported exclusively last September on the department’s shrinking staff in the wake of anti-police-violence protests in 2020 and due to low morale, stagnant wages and burnout.

“This significant reduction in officers significantly reduces our ability to deliver the amount of services we have traditionally provided to the Arlington community,” Penn said.

As a result, ACPD says staffing and priorities are changing in three ways so that officers can focus on follow-up investigations into more serious crimes.

First, officers will be dialing back investigations into crimes like scams with “no identifiable suspects,” hit-and-run crashes that are reported well after the fact and with little evidence to identify the striking driver, and incidents involving minor property damage that lack “solvability factors.”

Second, ACPD will continue to divert the reporting of non-emergency crimes that are not currently in progress and being reported well after the fact — such as fraud, theft, vandalism, harassing phone calls and minor property damage — to its online system. Submissions are then reviewed by an officer and, if approved, an official police report number is issued.

The portal was initially a pandemic-era invention to maintain social distancing between civilians reporting crimes and officers dispatched to respond to them.

“ACPD will prioritize follow-up investigations on crimes against people and serious property crimes,” notes a police press release. “Examples include, but are not limited to, homicide, robbery, carjacking, sex offenses, assaults, burglary and motor vehicle theft.”

Finally, Penn says vacant “specialty positions” — like community engagement and transportation safety — will not be filled for the time being, so ACPD can prioritize core services.

With the changes, Penn says he aims to give overworked officers a more sustainable work-life balance while focusing on investigating and responding to serious criminal incidents across the community. In the nearly ten-minute video, he tells residents they will remain safe despite the changes to staffing and priorities.

“Arlington remains a safe place to live, work and visit and the incredibly dedicated and professional men and women of the Arlington County Police Department work each and every day to make a positive difference in the lives of those we serve,” Penn said. “I am confident that despite our service adjustments, we will continue to work in partnership with the community and remain proactive in ensuring public safety.”

Penn says the forthcoming changes also align with recommendations from the Police Practices Group — a group the county formed after nationwide racial justice protests in 2020 — and those of an external assessment released earlier this year.

These reviews concluded, among other things, that ACPD can do more to recruit and retain officers with defined career paths, while removing officers from certain incidents like mental health calls.

The department says it remains committed to the following goals, despite the service changes.

“It is time for the county board to take action to retain our current employees and attract new officers who will continue the legacy of ACPD’s high quality of service,” the groups said.

Portions of the statement are below.

The Arlington Community has come to expect, and has received, a high level of service from the Arlington County Police Department, but unfortunately, that level of service is beginning to decline. Officers are leaving the department at an unprecedented rate and we have been unable to fill their vacant positions quickly enough to keep up. A major factor that contributes to our ongoing vacancies is our inability to compete with other local jurisdictions in terms of pay and compensation.

The functional strength of the department is currently at approximately 290 officers out of 376 allotted positions. As Chief Penn announced yesterday, ACPD will no longer investigate certain crimes, lowering the level of service for residents. That change in service was directly related to the low number of officers in the building.

The amount the department has spent on overtime that was required to maintain minimum staffing levels is equal to the salary for five officers. That money would be better spent hiring new employees. But therein lies the problem; The national narrative on policing has made it difficult to recruit and retain officers across the nation, not just in Arlington County.  The pool of individuals willing to enter this profession has dwindled and the departments in the Washington DC region are all competing for the same applicants. ACPD’s employment offer is being turned down by qualified candidates who instead choose other local jurisdictions with better starting salaries. This is a new phenomenon that ACPD has not faced in the past.  Additionally, ACPD has lost several officers in the first few months of their employment because the officers resigned and transferred to other local department with a higher starting pay.

Making it back to full staffing is not the long-term goal of the department.  With Amazon’s move to the county on the horizon, there will be an increased demand for services and additional staffing will likely be needed on a daily basis. The last thing Arlington County should want is a situation similar to Amazon Headquarters in Seattle, Washington where Amazon recently pulled employees from working on site due to safety concerns.

Unlike Arlington, other jurisdictions have seen the writing on the wall in terms of the hardships this profession is seeing in both retention and recruitment.  Falls Church took immediate action, giving their officers a 12% across the board increase that went into effect January 1, 2022. In addition, Falls Church will get their typical merit increases during the fiscal year. Leesburg also took immediate action, raising their starting salary from $53,233 to $62,000, a 16.5% increase.

In a time of service reductions due to staffing levels, limited numbers of qualified applicants, a record number of officers resigning from the department, and an increased demand from Amazon on the horizon, we are asking the Arlington County Board to take substantial action to retain our current officers and bring in new ones. ACOP and APBA has asked for a 10% across the board raise on July 1 in an attempt to mitigate the resignations and retain our staff.  he 10% bump would also place us in a more competitive position where offers of employment are less likely to be turned down in favor of other jurisdictions.

ACPD currently ranks in the bottom half of the 16 local jurisdictions surveyed for minimum and maximum salaries of police officers, corporal, and sergeants.