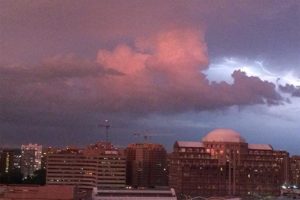 (Updated at 6:20 p.m.) Well, that was a historic week. The history theme will continue this weekend with a patriotic bar crawl tomorrow night in preparation for the 4th of July.

If you’d rather focus on recent history, like say the legalization of gay marriage throughout the entire country, then you’ll have an opportunity for that too; the Arlington Gay and Lesbian Alliance is hosting a Pride Month Social this Sunday evening from 4:30-7:30 p.m. at Freddie’s Beach Bar & Restaurant (555 23rd Street S.).

Finally some housekeeping. Remember, the “Freedom Four” race is going down on Sunday, so sections of N. Courthouse Road, N. Rhodes Street and Wilson Boulevard will be closed that morning. Parking will be limited in the area, but things should start opening up after 10:30 a.m.

Feel free to discuss this weekend’s goings on or any other topic of local interest in the comments.

Bishop Paul Loverde, the head of the Catholic Diocese of Arlington, has issued a statement opposing today’s 5-4 decision by the Supreme Court to legalize marriage in all fifty states.

The Catholic Diocese of Arlington represents most of northern Virginia in the Catholic Church. Loverde released his statement along with Bishop Francis DiLorenzo of the Richmond diocese.

The full statement is below:

Today, the U.S. Supreme Court ruled that the Fourteenth Amendment to the U.S. Constitution requires states to issue marriage licenses to two persons of the same sex, and requires a state to recognize as marriage the union of two people of the same sex when it was lawfully licensed and performed out-of-state.  We are deeply distressed by this decision which fails to uphold marriage as the union which unites one man and one woman.  This fundamental institution, grounded in natural law, predates any religion or nation.

All persons have inviolable dignity and deserve love and respect. Unjust discrimination is always wrong. However, our commitment to marriage is a matter of justice and fidelity to our Creator’s original design. Marriage is the only institution uniting one man and one woman with each other and with any child who comes from their union. Redefining marriage furthers no one’s rights, least of all those of children.

As Bishops, we believe it is more vital than ever that we share the Church’s consistent witness to the truth about marriage, and we call on Catholics and those concerned for the common good to continue to pray, live and speak out with charity about the true nature of marriage. The truth cannot be marginalized.

We will join with our brother bishops from across the country when we shortly share an additional statement from the U.S. Conference of Catholic Bishops, which will provide further analysis.