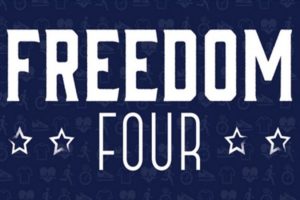 This Sunday marks the second annual “Freedom Four” race, which will result in some road closures in the Rosslyn and Courthouse areas.

To accommodate the four-mile course, the Arlington County Police Department will be closing roads sections of Wilson Boulevard, Clarendon Boulevard and Route 110 on June 28 (below). All roads are expected to be open to traffic after 10:30 a.m.

Parking in the area will be also be restricted during the race, and drivers should be on the lookout for temporary “No Parking” signs. According to the ACPD, illegally parked vehicles may be ticketed or towed.

The U.S. Track & Field-certified course will start and finish on Wilson Boulevard, near the restaurant Ireland’s Four Courts. The race begins promptly at 8 a.m., and participants are advised to arrive early.

Freedom Four was started last year by Pacers Running to replace their previously offered Fourth of July race, the Let Freedom Run 5K. For $40, residents can register for the race online.