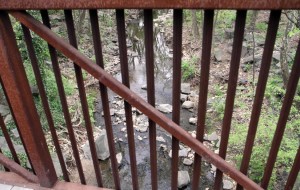 August brings the eleventh anniversary of the most notorious stream pollution incident in Arlington County history. In the years since golf course runoff poisoned the Donaldson Run and Gulf Branch streams, residents and county officials alike have stepped up their protection of our region’s waterways.

In August 2001, an herbicide applied to 12 fairways at the Washington Golf and Country Club washed into Donaldson Run and Gulf Branch after a storm. Eight thousand pounds of this herbicide, Basamid G, had been applied to kill all plant and animal life in the top two inches of the fairways’ soil. However, it did a whole lot more than its intention. The runoff killed an estimated 1,000 American eels. No living organisms were found in the streams following the storm.

Jen McDonnell, a Stormwater Outreach Specialist at Arlington’s Office of Sustainability and Environmental Management, said the incident “brought attention to the impacts that runoff can have on our streams.”

After this event, golf course officials agreed to halt the treatment of the remaining six fairways, which would drain into Gulf Branch. In 2005, facing civil charges, the golf course agreed to a consent decree in which it paid $145,000 to reimburse the costs incurred by the federal government — specifically, the National Park Service and the U.S. Fish and Wildlife Service — in responding to the incident.

Arlington County code makes it unlawful for “any person to discharge directly or indirectly into the storm sewer system or state waters, any substance likely, in the opinion of the County Manager, to have an adverse effect.”

McDonnell said that she is “not aware of any other penalty fines which have been paid for stream pollution.” However, she does know that polluters oftentimes have to pay for cleanup activities following a spill.

Despite the threat of financial consequences, pollution still continues, often unknowingly, from residents applying pesticides and fertilizers onto their lawn. The county and some environmental groups have been trying to counter the contamination with various stream-friendly projects.

END_OF_DOCUMENT_TOKEN_TO_BE_REPLACED 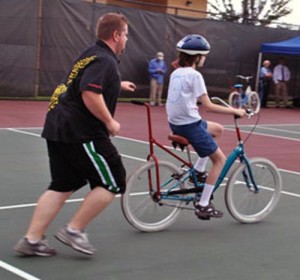 Kids with disabilities can learn to ride two-wheel bikes on their own at an upcoming camp co-sponsored by the Lose the Training Wheels organization.

This week-long camp for children between the ages of eight and 18 uses trained staff and adapted bicycles that can be modified as riders develop more skills and self-confidence. The success rate is high, as most riders are expected to begin pedaling independently by mid-week.

This is the third year that the Arlington Department of Parks and Recreation Therapeutic Recreation Office will be teaming up with the non-profit Lose the Training Wheels organization. The camp will be held at Kenmore Middle School (200 S. Carlin Springs Road), from July 30 to August 3.

A short awards ceremony will wrap up each session on August 3.

Dr. Richard Klein, founder of LTTW and the designer of the adapted bikes that are available at the camp will be present as well as the organization’s executive director, Lisa Ruby. The camp is co-sponsored by the Ballston Holiday Inn hotel, Red Top Cab, Arlington Kiwanis, and John D. McClelland and family. 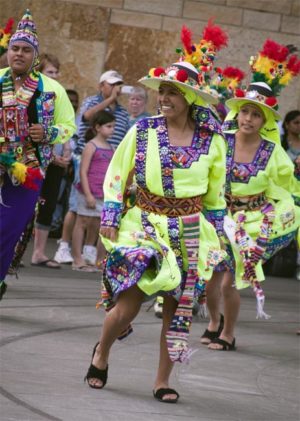 Arlington residents can enjoy a musical taste of Bolivia without even leaving the county, as the Comité Pro Bolivia will be holding a Bolivian Cultural Night on Saturday (July 21).

As a non-profit cultural organization now celebrating its 25th anniversary, the Comité Pro Bolivia will showcase eight large Bolivian dance and music ensembles. Each performance will vary from Suri Sicuris, which is traditionally performed before the ostrich (suri) hunt, to the Tinku dance of strength and agility.

The event is free, open to the public and will begin at 8:00 p.m. It’s being held at the Lubber Run Amphitheater at North Columbus and 2nd Street North (two blocks north of Route 50). The amphitheater is wheelchair accessible.

Bolivians make up 20 percent of the approximately 33,000 individuals in Arlington’s Hispanic community. Numerous Bolivian dance groups have been active throughout the county since the 1990s. The Comité’s stated goal is to focus on the dancing traditions which help bring together the Bolivian Community in Arlington and to also create a feeling of belonging and home.

The event and is co-sponsored by Arlington Cultural Affairs, the National Endowment for the Arts, and the Folklore Studies Program at George Mason University. For more information, call 703-228-1850 or visit www.arlingtonarts.org. 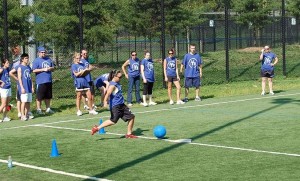 The seventh annual Safe at Home! Kickball Tournament is scheduled for Saturday, Aug. 4 in Arlington.

Since 2006, the event has benefited the Arlington-Alexandria Coalition for the Homeless. The non-profit organization provides transitional housing for homeless families in Northern Virginia.

The event will be held from from 8:30 a.m. to 5:00 p.m. at Long Bridge Park, near Crystal City. Previously, the tournament was held at Arlington’s Barcroft Park.

Over the last six years, the competition has nearly tripled in size to 25 teams and 375 players. Organizers say they expect this year to be the biggest yet.

The all-day charity event is open to the public. For spectators, there will be music, free parking, face painting, and food from a number of local vendors. Raffle prizes will be presented, and a misting tent and bottled water will be available.

For those who want to play, teams are registered by their captain. The cost for a 10-to-15 member team is $750, and each member will receive a Safe at Home! T-shirt.

Prizes will be awarded to the top two teams, as well as two MVPs. The event still needs volunteers for setting and cleaning up, as well as raffle donations. Anyone seeking more information is asked to contact [email protected].