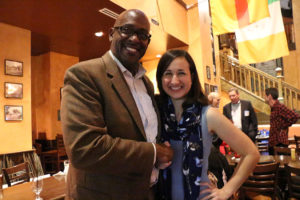 Local Republicans see a silver lining in the lopsided defeat of Mike McMenamin in Tuesday’s Arlington County Board. But one local political watcher says it signals that the narrow window of opportunity to elect conservatives to local office in Arlington has passed.

Democrats say they were pleasantly surprised by the election results.

“It turned out much better than I predicted it to be,” said Arlington County Democratic Committee Chair Kip Malinosky. “I think people responded to an inclusive, welcoming message.”

“We always took [McMenamin] seriously,” Malinosky continued. “We knew he had a good record of public service. But we didn’t hear a positive vision for Arlington from Mike. Voters heard a lot of ‘no.'”

Matt Wavro, Chair of the Arlington County Republican Committee, sees things a bit differently. Via email, he told ARLnow.com that all four candidates in the race ran on a platform of fiscal responsibility — a victory of sorts, even though the GOP’s favored candidate did not win.

Mike ran a solid independent campaign. The Arlington GOP was very proud to endorse his independent candidacy. Mike’s earnest desire to bring people together to solve issues facing the county should be acknowledged by everyone involved in politics in Arlington.

The future of the Arlington GOP is strong. Our goals of cancelling the streetcar, reducing the cost of the Million Dollar Bus Stop, ending the subsidy of the Artisphere, preventing a property tax rate increase, and turning back the plan to build subsidized housing in our parks enjoyed and continue to enjoy wide community support.

With the exception of a firm commitment that subsidized housing should not be built in parks, every candidate for the County Board campaigned on our issues. Even the candidates who were leveling partisan attacks against Mike were trying to appropriate the very issues we considered as the basis for endorsing Mike.

Democrats on the County Board were very effective in 2015 at clearing the decks of issues that highlighted how out of touch narrowly partisan Democrats were from their more rational and reasonable neighbors of all political persuasions.

“Looking out at the issues that are likely to be taken up in the next year, our platform will continue to be a consensus-building counter-point to the partisan Democrat group-think we saw from our County Board members in 2013 and the decade prior,” Wavro added.

Despite Wavro’s optimism, one veteran Democratic campaign operative and election watcher thinks the result shows a return to normalcy in heavily-Democratic Arlington after a brief flirtation with center-right politics.

“It’s back to normal in Arlington,” Ben Tribbett told ARLnow.com. “The voters Tuesday were strongly Democratic, where they’ve always been.”

Tribbett, who correctly predicted the demise of Arlington’s streetcar project on the night of independent County Board member John Vihstadt’s election last November, said McMenamin’s defeat is “embarrassing” for Vihstadt.

“Vihstadt’s endorsement [of McMenamin] had no legs, voters basically ignored it,” Tribbett said.

The center-right flirtation was made possible by the streetcar, the Long Bridge Park aquatics center and other poorly managed, big-ticket projects that drew voter ire. With those out of the way, and with all candidates calling for some degree of fiscal responsibility, voters returned to other issues as deciding factors — issues that favored the Democrats. 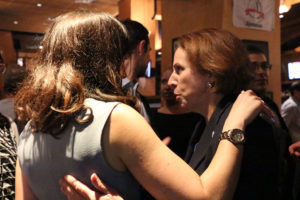 (Other political watchers have suggested that it wasn’t just the streetcar that propelled Vihstadt to victory, arguing that he was a uniquely strong candidate with a long history of community involvement, thoughtful debate performances and well-tuned political acumen. There are no other Vihstadt-like candidates on the Republican-slash-Independent bench, some say.)

The Arlington electorate seems to have “lost their appetite for reform-type candidates,” Tribbett contended. That, he said, could signal trouble for Libby Garvey, who’s up for reelection in 2016.

Garvey, a Democrat, went against the party by speaking out against the streetcar and endorsing Vihstadt last year. She could face a tough primary challenge this coming spring as a result.

Tribbett placed the blame for Democrat Alan Howze’s stunning defeat squarely on the shoulders of the County Board itself and its communication “meltdowns.”

“The Arlington County Board is insular, arrogant, doesn’t listen well to the community, insults people when they disagree with them,” Tribbett said.

In addition to discussing the role the streetcar, the million dollar bus stop and other spending projects played in stoking voter discontentment, he examined the precinct-by-precinct crossover vote — those who voted for Democratic Sen. Mark Warner but also voted for independent John Vihstadt.

The smallest crossover vote margin in a precinct was 28 percent, Tribbett said. The largest was 82 percent, in the Arlington Forest precinct, which has objected to a plan to build affordable housing on top of the neighborhood’s Lubber Run Community Center.

Tribbett also blasted the belief of some Democrats that John Vihstadt “tricked” voters by running as an independent and not as a Republican.

“Arlington County has just been full of debacles recently. You can see how Democrats are upset at the local level and making conscientious decisions,” he said. “This is where the Arlington County Board is really messing up. These are extremely well-educated voters. They know exactly what they’re doing. They’re not mistakenly voting for the Republican. And [Democratic leaders] keep expecting them to turn around as if it’s a mistake.”

“[It’s] in the heart of the most liberal area of Northern Virginia… the whole thing in Arlington has just been breathtaking,” Tribbett concluded.

Democratic candidate and School Board member Libby Garvey is facing two candidates who have both run for the County Board before: Republican Mark Kelly and Green Party candidate Audrey Clement.

Clement received 9,728 votes in the 2011 November general election, when she was the sole challenger to Mary Hynes and Walter Tejada, who both ended up winning reelection. Kelly received 20,570 votes to Democratic incumbent Chris Zimmerman’s 32,894 votes in November 2010. Special elections, however, tend to attract far fewer voters.

As detailed in an email from Arlington County Treasurer and amateur election statistician Frank O’Leary (see table, above), the turnout for special elections has ranged between 18,000 and 22,000 over the past 22 years, compared to the more than 57,000 votes cast in the 2010 County Board election. In two of those special elections — 1993 and 1999 — low turnout helped to propel a Republican to victory over a Democrat. 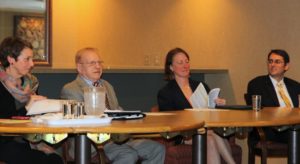 O’Leary thinks tomorrow may see near-record low turnout, thanks in part to voter fatigue. Democrats voted in a primary in August, a general election in November, a caucus in January, and are now being asked to go to the polls yet again. Plus, there’s the issue of party unity.

“Some may still be nursing grudges as a result of the five dimensional recent Democratic primary (which evidenced a dismal turnout, even allowing for winter weather),” O’Leary noted. That opens up the opportunity for Clement or Kelly to pull out a surprise victory, if either can get enough voters to the polls.

Since 1990, no Democrat has received fewer than 9,143 votes in a County Board special election. At the same time, no Republican (or third party) has received more than 9,788 votes. As such, 10,000 may be the magic number for any of the three candidates.